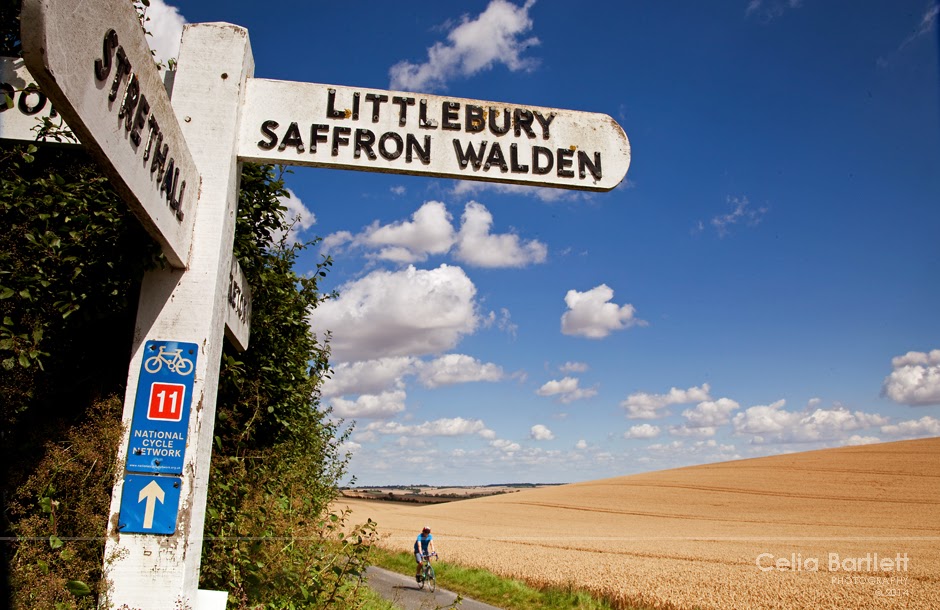 "Hiya Celia... I have one which is probably quite easy to capture..:) "Uttlesford's extensive Cycle Network" ... go interpret that how you will :)"

After braving the torrential downpours of yesterday evening to capture the shot for day 8, by contrast, the morning of day 9 was glorious! Sunshine, blue skies, puffy white clouds...the right sort of day to go out on a cycle ride - and that is just what himself did. Well, at least until a message came through to home at about 8.30 am that a puncture had put paid to the ride and could someone please rescue him? (I'm grateful to S-i-L for being on green flag duty).

We are very fortunate to live in such a lovely rural area where there is a criss-crossing of lanes ideal for exploring by bicycle. This has already been recognised with the well marked Route 11 passing though a delightful little corner of Uttlesford near Littlebury and Saffron Walden, and is a little backwater that I often pass through on my way to my favourite local walking spots. When we have taken outsiders along these lanes, they are so often surprised by this beautiful hidden away spot. It was no surprise to me though, to find Route 11 being well used on this beautiful morning, with several bikes passing through whilst I was there. On a leisure ride from Cambridge to Saffron Walden, the lad (who just happened to appear in my picture) stopped to ask me if he should continue on the route or cut through another way. There was, of course, only one answer for that.

So here were two examples of riding for pleasure. What about riding for essential purposes such as going to work? The one thing about being a peaceful rural town and yet only one hour by train to London, means that there are many who will do the daily commute. For those in Saffron Walden, the nearest station is Audley End, but is about two miles away from the centre of town. Many will drive and park, some will use the local bus service to get there but there are those who prefer to cycle and even walk to the station. Unfortunately, the two miles along a country road is not an easy two miles for the latter two. It is a narrow, unlit road, where the commuter vehicles often don't respect those using pedal power, so it is no wonder that there is a long running campaign to create a suitable and safe route to the station.

With the Tour de France having passed through Uttlesford just a month ago, it left a small legacy in its wake for resident cyclists, in the form of selected roads having been resurfaced - a safety benefit, and some cycle bars in the town centre - a security benefit. However, wouldn't it be wonderful to see the Wenden Road issue being addressed as the biggest legacy of the 'summer of cycling'?