March roared in like a lion with over 300 motorbikes joining 'The Bomb Run' charity ride from Coggeshall to Carver Barracks in Wimbish, to raise funds for B.R.A.V.E.  Bikers Respect All Veterans Equally
Chris Baker, a former Royal Engineer, who became paralysed after suffering injuries when his military vehicle was hit by an IED, founded the organisation which raises funds to be shared around various military charities.

The ride was led by Chris on his special Harley trike, and riders from all over the region roared onto the windswept airfield behind him for a group photograph in front of some of the military vehicles stationed at the barracks.

By contrast, the gentle pastime of an Easter Treasure hunt, took place at Thaxted URC, where children were given a booklet of clues, to help their in search for letters hidden around the church. Once these had been collected and re-arranged to form an Easter greeting, families were invited to sit back and enjoy tea and cakes in the newly opened-up community space within the church.
View the gallery

Continuing in the treasure hunt theme, Saffron Walden County High School Farm Club held their open day on a cold and dreary Easter Eve. This didn't deter masses of families arriving for the indoor barn activities, in an attempt to dodge the unpredictable weather. Once again, clues were provided to guide the young visitors to the hiding bunnies.

All the usual farm animals were there for visitors to become acquainted with - Dexter cattle, goats, sheep, guinea pigs, ferrets...
There was some reserve when encountering this constantly wriggling mustelids but thankfully all children went home with all of their fingers, although the farm club crew-member had nicely scratched hands (and a smelly sweatshirt!) Despite their odorous faults, I do have rather a soft spot for ferrets myself.
View the gallery

From furry wrigglers to yellow swimmers. Easter Monday brought the crowds out for the 1st Rayne Scouts annual duck race. These quackers, some of them veterans of many races, were assigned to hopeful custodians and over 1,000 ducks were released into a fast flowing River Brain. Storm Katie had just passed through and so the trailing wind helped to rush the bobbing bath-mates along to the finish in swift time, with the crowds keenly following on alongside the river bank.
View the gallery

As March came in like a lion, so it had to go out like a lamb, and just to oblige, one of the four-week-old farm club lambs provided a cheeky baa! 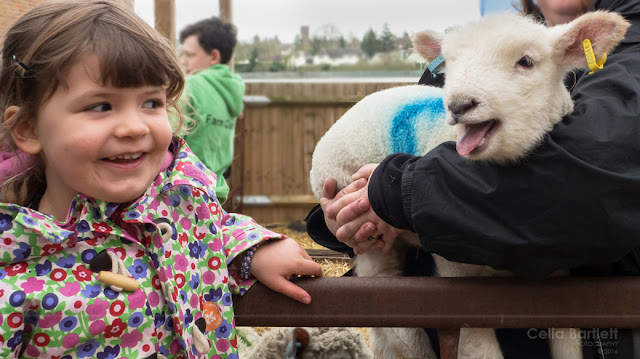