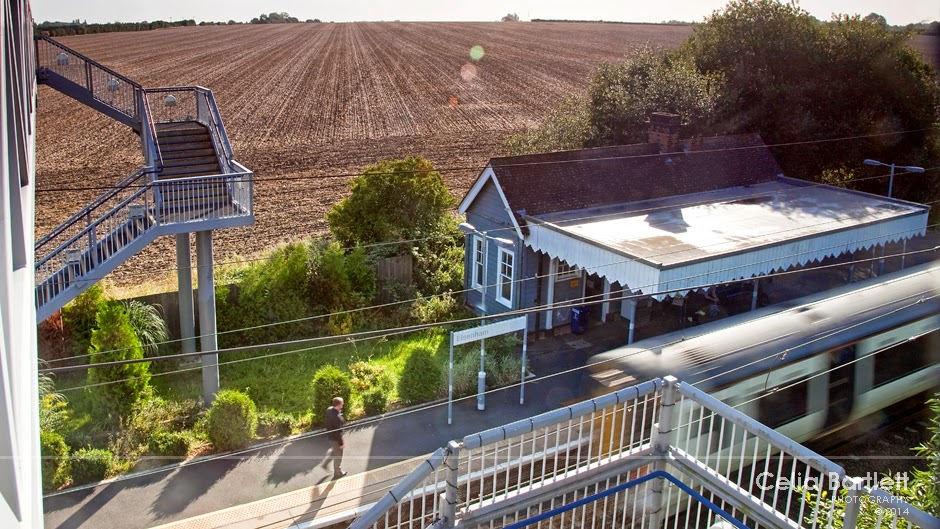 "How does Uttlesford demonstrate the rural idyll sitting comfortably alongside the pace and rush of a modern society?"

A tricky one for sure! I had an idea how to illustrate this one but whether it was going to come off...

As I mentioned before, I have lived in Uttlesford District for thirty years now, and one of the things I remember from over the years, was that the little rural railway station at Elsenham was always one that stood out because of the wonderful display of carefully attended flower pots, baskets and flower beds. It was a real picture of rural idyll. This was a tradition which had been going on for years and yet I'm not aware of when it all began to disappear, as more often than not, I was whizzing through on the non-stopping train up to London, just as many commuters do on a daily basis. It came as a bit of a disappointment today, to find that this pretty little station had lost the charm it once had. In fact, Elsenham station has taken on a whole new look following the tragic accident when two young girls were struck an killed on the level crossing, in their haste to get to a train. Since then, a pedestrian foot bridge spans the track so that the likes of the tragedy of 2005 may never happen again.

It was from this bridge that I set up my shot though this morning- the 08.08 non-stopping train whizzing through as commuters gathered on the London-bound platform waiting for the 08.29 service to London Liverpool Street. The juxtaposition of old and modern - the traditional waiting room and the steel bridge, against a backdrop of morning sunshine and newly harvested fields, clearly visible. It was also visible that unlike years ago when commuters would read a newspaper whilst standing and waiting, today's commuters had their heads bowed over a little electronic gadget and were immersed in their own little world. Commuting has been going on for many, many years, but the face of commuting is forever changing in our increasingly faster pace of life. Technology has taken over with the signalling, the train announcement boards, and the actual lives of each commuter. Some things haven't changed though - the level crossing gates are still manually opened and closed. Sadly, though some things have gone - the beautifully tended station garden, no doubt a victim of staff cuts, so no time to spare for non-essential services.

Does this remaining rural idyll sit comfortably alongside the pace and rush of modern society? Well it rubs along with the technology, and the folk who make the commute are probably just relieved to escape from the city at the end of each day. However, knowing that they live in Britain's most desirable rural area can be seen as a useful benefit with, amongst other things, Uttlesford affording lower crime rates and thus lower insurance rates than other areas around. So on that score alone, it could be seen to be a comfortable association between rural idyll and the pace and rush. However, I'm not going to pretend that I am looking at this through rose-tinted spectacles as nowhere is perfect but I have to say, all-in-all, I'm pretty happy to be living here.