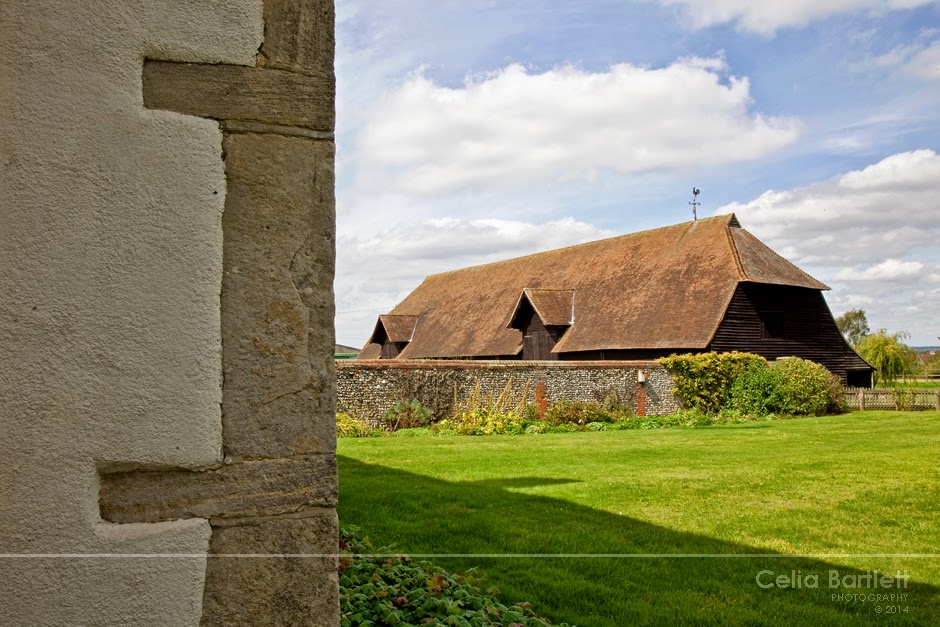 "That time again!!! Love the challenges last year! May I set u the challenge of Uttlesford's oldest building? And to confirm, a building still in use and not a ruin."

Having lived in this cosy corner of North Essex for almost 30 years, I have come to know many of the local landmarks and features. One such landmark being the incredible Prior's Hall Barn at Widdington. With this area of Uttlesford being rich in medieval buildings, it's no surprise to find this barn - one of the finest surviving examples of of its type in the East of England, and I couldn't but fail to be impressed on the occasions when I have visited it.

"But?" I hear you say...Yes, I know, it is old and not a ruin but is it in continual use? Well, no, but over the other side of a flint wall adjacent to the barn is another surprise. Prior's Hall Farm is a beautiful family home, full of charm and character, and under the blue skies this morning it looked friendly and inviting. Clearly a building with history, and a history which I wanted to find a little more about as I had been directed to it by a local historian, indicating that it could well be the oldest (continually) inhabited building in the area, if not in England. With a heritage possibly dating back to the late tenth or early eleventh century, this building of saxon origin, pre-dated the beautiful medieval barn by four hundred years or so. Hard to believe - but there was evidence. Maggs, the lady of the house was so kind as to point out the features that had led previous owners and historians to determine it's heritage.

Running ground to eaves next to the front door was a a band of exposed stonework, and which was mirrored at the other end of this north-facing side of the house. With long thin vertical stones punctuated by long thin horizontal stones (see example e) these features were a clear indication of saxon architecture. The presence of a v-shaped stone window arch and a solid semi-circular arch, now incorporated in an end wall corroborated the evidence.

As I stood in the sunshine in the beautiful gardens, listening to the robin singing in the nearby fruit tree, I chatted to Darrell on the cordless phone that Maggs had handed me. He explained to me more of the fascinating history of this Grade 1 listed building, from involvement with William the Conqueror, to Edward III, to the manor becoming part of the estates of New College, Oxford. All far more involved than I can write here in this short post. As we chatted I looked back at the manor house and clearly there were medieval and later additions, but for me, this fascinating evidence was good enough to allow me to present to you what is probably the oldest, still in use building in Uttlesford, my picture showing you the beautiful detail of the saxon quions, set against the backdrop of the medieval barn.


My grateful thanks to Darrell and Maggs for allowing me to photograph a corner of their beautiful home, and also Martyn for the inside historical information.