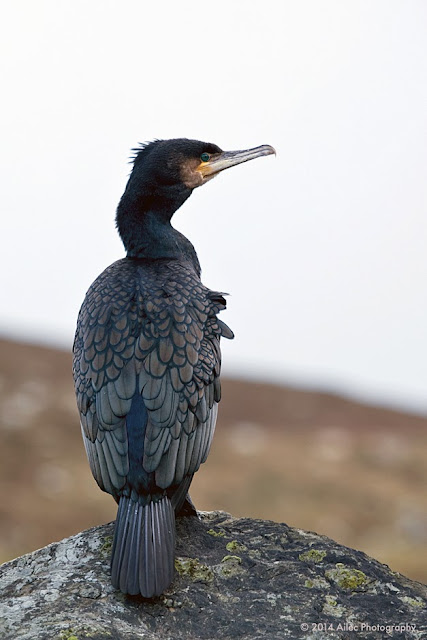 Is it a cormorant or is it a shag?
A question which is often asked, and to be fair, one I often have problem with from a distance. 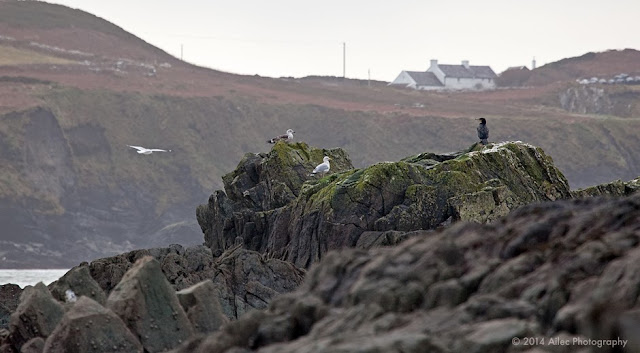 In between the wild weather we have been having in West Cork, I managed to get down for a walk with mutt on another nearby strand this morning. What a joy! Watching the oyster catcher probing the wet sand, the herring gulls stand in line along the low tide edge and the cormorant drying its wings up on the usual rocky perch.
...or was it a shag?

Leaving mutt to her own sand-digging devices, I began the task of rock scrambling to get a closer look. It is a scramble I have done on many occasions as this rock is a favourite of many sea birds and I have one particular shot which I am still trying to bag - but that one wasn't for today. Nope, any decent shot of the black 'sea ravens' (as the Latin name suggests), atop this rock would be just perfect. However, going on past experience, it would be tricky to get very close as they can be rather flighty with the slightest movement along the rock line. As I advanced forward, it was actually the gulls which made the first exit, leaving a solitary cormorant / shag.

By the time I had advanced to just a few feet from the sitting bird, the drying process was over and the wings had been tucked away. Carefully, I eased my 400mm up onto the edge of a rock as I tried to remain hidden. It knew I was there and went onto high alert but not before I fired off a few shots (as one above) of this sleek bird. A quick review on the back of the camera suggested that this one might be a cormorant but rather than spending too much time chimping I opted back to shooting and set the lens back in place for a few more shots. Then joy of joy, I had THE identification opportunity. 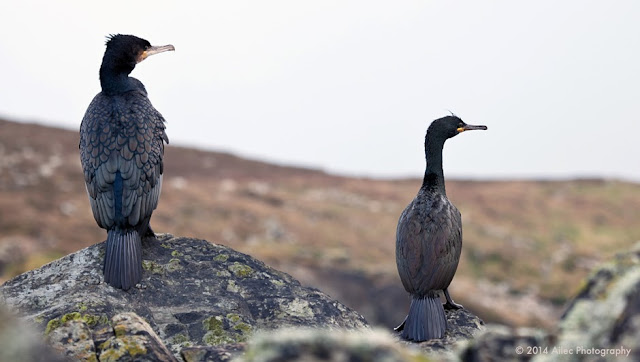 A second of these sleek birds flew up and sat alongside but not for long enough to begin the drying process. I fired off just a few more shots before retracting my lens below the parapet as the pair flew back off to sea.

Although these cousins have very similar features, by seeing them side by side it clearly showed up their differences.
The body size, slenderness of the beak, the hook to the end of the beak, the thicker throat and whether the crest is above the eyes or at the back end of the long head taper. The cormorant (on the left) and the shag are clearly different.

Oh so simple when you know how!