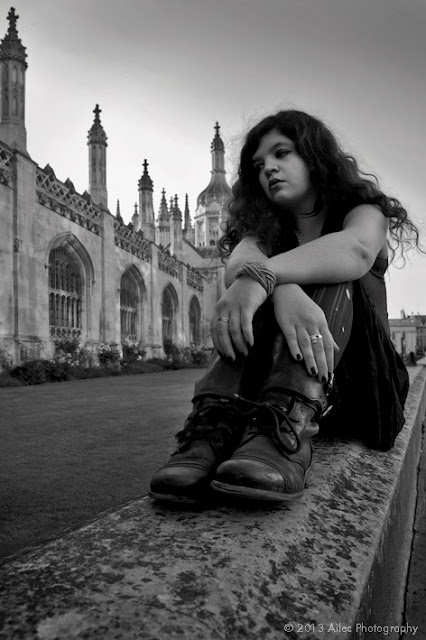 "Would it be okay if we rescheduled for tomorrow evening? Got stuck behind a tractor on the way to the station (I'm still in Suffolk) and the last train has left."

This is what had come through when I checked my text messages before going to bed late last night. My kit bag was already packed for the 6.30 start we had arranged and although the morning was my preferred shoot time, my model being in the wrong place for the morning pick up meant that the shoot would have to go ahead in the evening instead. I was easy either way, but the evening would mean more spectators and as long as my model didn't mind then nor did I. After all, it would allow me to lie in bed for longer, following the 4.30 start that morning for the hares. I was ready for more sleep!

My chosen location for the shoot, was the iconic Kings College Chapel in Cambridge. A grade 1 listed Gothic building, and with restricted access it would make a shoot inside, out of the question. For this shoot though, outside would suffice. So this evening, I picked up my model, her thick black wavy locks of hair being her most striking feature. Her goth style, in no way extreme but distinct never the less. Arriving at the location, it was clear I would have to work around the masses of tourists still swarming towards this famous facade, all wishing to be photographed in front of it. My model appeared quite able to block out these distractions, although we were photo-bombed by a large group of 12 year-old Chinese school children, all sporting the same uniform of bright blue tracksuits with matching baseball caps covered in a gaudy flower pattern. Not quite in keeping with the Gothic nature of this shoot!

The light was a lovely summer evening light. All the earlier clouds had vanished, so there would be no drama from the sky. All the drama would have to be created from what I had - an iconic building, a model and a swift turn-around with the edit. So, Mark, I do hope I have been able to achieve that for you? 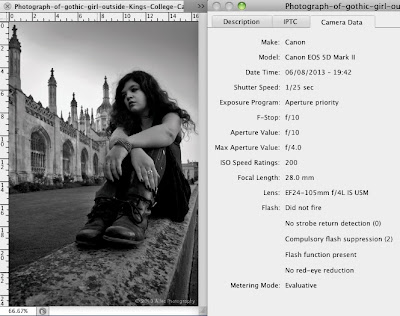 My thanks to:
Mark for his suggestion
Ros and Justin for being the go-betweens
Shelby for being a willing model