Suggested by - Enna via blog 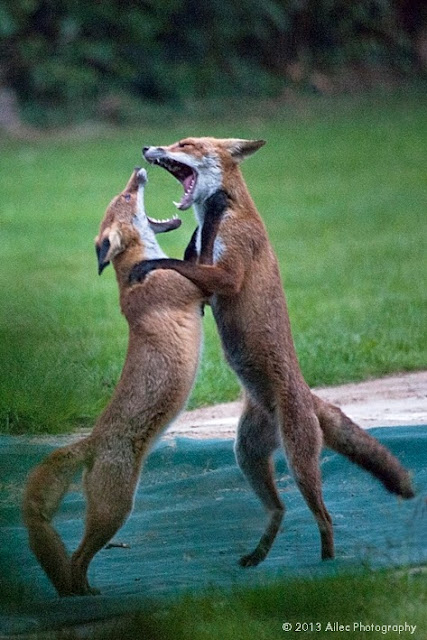 Ok, so I shall come clean straight away, this image wasn't taken today... 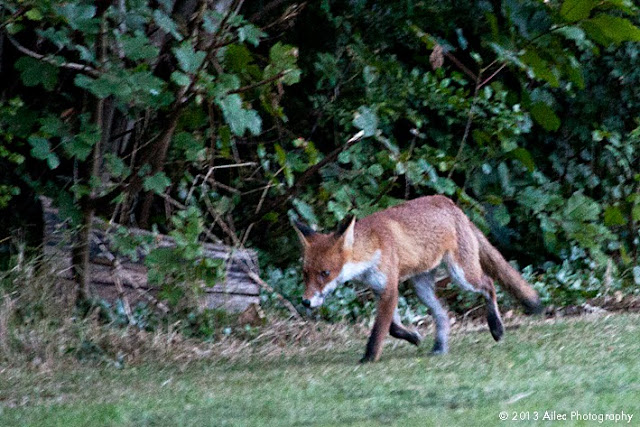 However, they were both taken at the same location, three days apart and were both the best shots of the day(s) and with varied levels of success (or not). It just goes to prove what I am always saying that wildlife photography is a game of hit-and-miss. But when it is a hit, nothing can compare. (Talking of hits, what is it about the animals taking a swipe at each other this month? First the hares, now the foxes!) What could have been worse though would have been seeing no foxes at all today, and then I really would have fallen at the last hurdle!

When my alarm woke me at 5am this morning, I knew straight away it wouldn't be such a great morning for wildlife spotting. The wind was gusting through the trees outside - what a contrast to the calm misty morning I had had for my reccy day on Wednesday. This brings me to another point about wildlife photography, always check out the location first. I'm so glad I did, otherwise I wouldn't have caught these two young foxes having a spat in the long-jump sandpit at the far corner of a school playing field. I watched through the fence from a leafy alleyway, as two adult foxes and around six youngsters gathered in this athletic landmark in the still-gloomy early morning light, necessitating the use of high ISO. It wasn't long before ears were folded back and the fight kicked off, the rest of the foxes slinking off and not wanting to get involved. I was happy as I had albeit, grainy shots to prove I had located a guaranteed den area of urban foxes.

Finding this location came after a chance comment
"I'm still looking for urban foxes" I said
"Oh I have them down my road. They've been there years and I see them at all different times of day"
"Tell me - tell me!" I said excitedly.
Sadly they were not in my home town, but a town 12 miles away. It wasn't through lack of trying that I hadn't come up with a local fox. I know there have been foxes in town, I had heard them myself in the past but not necessarily regularly. (Although now, I'm bound to find out that right under my nose, someone has a regular visitor!) I had put up wanted posters, asked the local dog walking service, asked those I thought would be in the know but nothing. I asked the town vets, to which their reply was
"I will ask staff here but I think you may be better off going to a bigger town"
And that is exactly what I had to do.

On my first visit to the location, I had had a fox cross the road in front of me. It looked promising. I was in a dense residential area surrounding the playing fields of a large school, the hedge line between the field and the road, containing the den. Perfect! All I needed now was for the fox to trot down the white line for me on Saturday morning - Houses in the background, urban fox in the foreground.
I've been at this game long enough to know that it doesn't happen like that, and as much as I would like that instant dream shot to fulfil the brief, I know I have to be content with whatever the foxes or animals offer me. This morning it was not very much I'm afraid. Just two foxes braved the windy conditions, hugging the distant hedge line whilst carrying home their spoils of the night. I waited in hope that one might come my way, and swiftly it did, offering me the chance to fire off about half a dozen (miserable) shots before it disappeared down into the den.

As the alleyway streetlight clicked off behind me, it prompted me to check my watch. It was 6.30 am and the sun was rising in the clear wind-blown sky. There was little chance that I would see the foxes again now but I had sufficient (although not prizewinning) evidence to prove that I had completed my final challenge. 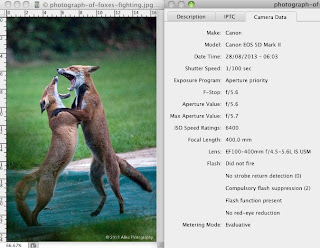 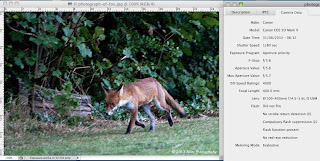 My thanks to:
Enna for the suggestion (you so-and-so!)
Luke for the tip-off

Tomorrow is - September
So that concludes my August Challenge for 2013. I may be back with it again next year. Until then... just keep dropping by into my blog anyway!

I've had much fun and hope you have enjoyed it too.