Challenge - "Underwater via an aquarium or fish tank, 21st" 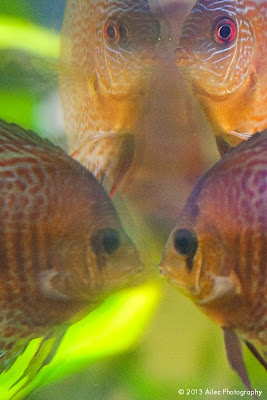 Although I have discussed underwater housings for my G12 with today's challenger in the past, I still haven't yet taken the plunge with my cash, or the plunge with the camera for that matter. As a little camera, the G12 might be worth the risk but I certainly wouldn't consider putting my big DSLR underwater. This meant that 'underwater' would have to be approached from a different angle and seeing as it stated 'via aquarium or fishtank', it relieved me of task of doing a quick PADI qualification.

Aquarium or fishtank. Now that wouldn't have been a problem less than two months ago but some of you may have noted my glee when the fish finally left home to live with their rightful owner - our recently graduated eldest. This now left me with a slight dilemma, where was I to find a suitable fishtank. It crossed my mind to make a visit to one of those seaside aquariums, where it is possible to walk through tunnels 'underwater' and sure, it would have been rather cool to get the underbelly of a shark. However, the seaside is a daytrip, and I allowed myself one of those yesterday. Fishtanks a bit closer to home then ...my local garden centre!

Thankfully they were very obliging and allowed me to shoot away 'sans flash' (would I do anything else!). At first I was fascinated by the wonderful shimmering colours and amassed a lovely collection of abstract colour patterns from long exposures. Then I turned to the little joker - the clown fish. Cute and instantly recognisable by even the youngest of visitors, I heard the cry of 'Nemo' with some regularity. So not that one then. Eventually after visiting all of the 2 dimensional fishtanks I happened on one which I could see through three sides.

Having had a fishtank at home, I knew there would be a wonderful mirror effect which I could take advantage of. Now, to just wait for the... erm (I forgot to check but I think they were some form of Angel fish) to move into the right place. With only one 4GB card with me, I had to delete many shots of unobliging fish poses (never work with animals!) but my mantra of just 'going with them' would surely pay off eventually. After what seemed like an eternity of those pursed lips coming to greet me at the corner of the tank, and the umpteenth time I was down to the last shot on my memory card, I disheartedly fired off another last shot. A quick look at the screen on the back of the camera and I realised that "that would do it!"
(What is it? So many times, it is either the first or last shot that ends up being the one!)

On reflection, it was lovely to move back to glorious colour after a couple of black and white days.
So Richard, here for your "underwater". Are you seeing double? My thanks to:
Richard for the suggestion
Maidenhead Aquatics for allowing me to lurk in their tank rooms