Challenge - "A Maze for the opening day of the Saffron Walden Maze festival on the 16th."

Suggested by - Celia via blog (no, not me, another Celia!) 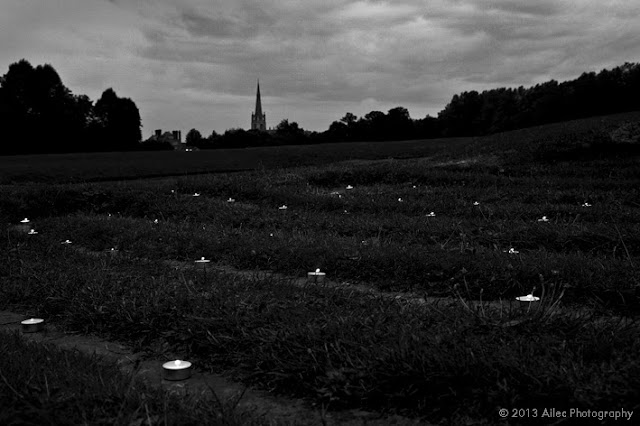 As I write this post, the rain is just starting to patter onto the skylight above my desk, and at 6.00 this morning I was battling to keep the candles alight in a stiff breeze. This could be bad news for the organisers of the Saffron Walden Maze Festival as a whole raft of activities kick off this weekend. Fingers crossed the weather improves for them.

For those of you who don't know Saffron Walden, we are unique in having two mazes in the town. The yew hedge maze in Bridge End Gardens, which is what everyone thinks of as a maze, and the ancient turf maze on the common, which I photographed early this morning (before I had too many curious passers-by!) It is about a mile in length, with the path of it laid out in bricks and on alternate ones, I placed lights to mark the way on just a small corner of this labyrinth.

Call me cunning if you wish, but many was the time I suggested going for a walk to our bored, and at the time, young off-spring, only to be met with a response "I'm too tired" When it was suggested it would be just a short walk to the Common, they often cheered up as they knew it really was just a short walk. But what did they then do? Spend the next 30 minutes excitedly following the brick path, and walking a whole mile - while I sat and watched!

So, Celia, it is only now that I have reviewed the website for the festival that I find the tea-light idea has been used before, but maybe not so moody nor at such an early hour. So for this almost 'copy-cat image', I do apologise!

My thanks to:
Celia for the suggestion