Challenge - "What about highlighting the sad demise of our wildlife through roadkill?
Any Sunday and has to be in colour." 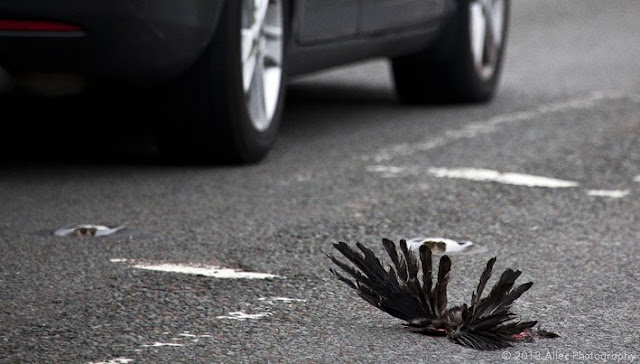 When this challenge popped up in my message box I could quite easily have deleted it because "it might not be appropriate" Appropriate for who? Well, I am aware that today's challenge could quite possibly upset some viewers, and for that I do apologise but for me, it was another challenge that was set, and was happy to take it on. After all, when being commissioned to do a shoot, I can't afford to be choosy (within reason of course), just because I don't fancy it. It is all work, and should do my best to fulfil the brief.

I have seen some spectacular roadkill over the years, and whilst it is always sad to see, I have a certain curiosity for the more unusual victims. I have had to, as himself was always keen to educate our offspring by whatever means, and if it meant roadkill was the subject, then so be it. Roadkill is a sad fact of life but one that ultimately adds to the whole circle of life too.

My search this morning took in town roads, back lanes and main roads, and the usual flurry of pale grey feathers put in appearances on a few occasions. (Why do pigeons sit in the road with that "Me? Move?" look!) It is the wrong time of the year for pheasants - another candidate for the 'hit-me brigade' - but I was looking for something a little more interesting. Something that had that poignant, 'oh, that is one more gone', sadness.

Rabbits were the most numerous, and I stopped by a couple to record the victim, as if I was a SOCO. It amazes me that drivers still blindly seem to drive over these poor things, even when they have ended up off the main wheel line- as I discovered when observing from a verge. One motorist created glorious 'sound and smelly-vision' right in front of me!

However, not quite what I was after, and I had had news of the demise of a hedgehog near to home. Always sad, knowing how much they are struggling at present. Unfortunately, by the time I arrived, it was a bit too much of a 'squidgehog' and the resulting images would have fulfilled the 'sensational' pages rather than the 'sensitive' pages of any publication. Then, on one last drive along a local main road, I was given the come-on by a mass of black fingers - the most interesting sighting all morning. I did a quick turn around and returned to the spot and before any more damage might be done by switched-off drivers. It wasn't long before a car sped by and, under the gaze of two pairs of sinister cats-eyes, the down-draught from the vehicle made the wings of the deceased corvid rise up in an eerie wave.

Whilst the brief was for a colour image, by strange result, it has become mournfully mono-chromatic, apart from a slight touch of red on both the car and the corvid. So, Beefy, I hope you will forgive me if the image isn't as colourful as you had hoped. After all, I have my readers to consider!
(Speak to me later, I might just reveal the censored pictures)

My thanks to:
Beefy for the suggestion