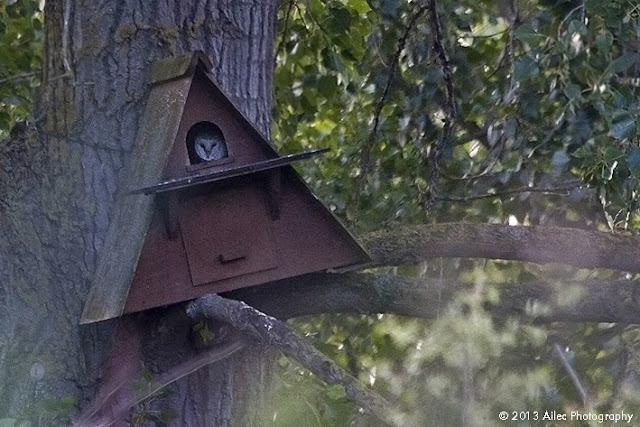 The suggestion of owl made me smile. One of my all-time favourite birds! So much so, I had amassed a collection of assorted 'wols' during my teenage years, some of which I still have sitting on an attic room shelf. (I always felt that was the right place to have them). I decided that this could be my 'plan C'. That is, resorting to photographing this collection, although I did have a better option 'plan B'.

My determination though, to photograph 'plan A' - a real live owl was paramount, and when I knew of this challenge, I began re-acquainting myself with some of the local owl haunts that I have sadly neglected visiting in recent months. But I was drawing a blank. I asked a friend if I could come and photograph her barn owl that lived on their farm. Again, a similar issue. I believe the bad winter has had something to do with the reduced numbers of owls this year, with many having perished due to lack of food. Even their owl had been rather scarce with appearances, although they said I was welcome to go and sit and wait and see. I did, but with no results.

I knew that an image of a beautiful ghost-like bird, silently skimming the hedgerows during the dusk hours was going to be difficult with such a small mount of preparation, and so I had to re-set my goals. To be fair, just a shot of an owl would fulfil the brief, so, to get that perfect shot would be an amazing bonus. But where was I going to guarantee even seeing an owl?

I was to have two chances to grab the shot - morning or evening, the times when the owls were most likely to be about. The relative 'cheat' option of visiting a zoo or raptor centre was out of the question due to my working commitments, thus 'chance 1' had to be taken.
4.30am this morning, my alarm went off and I drove to a place where we had regularly seen a barn owl. It was a long shot that the owl would oblige. Needless to say, it was a no-show but it didn't matter greatly as it was a beautiful, 17 degrees, sunny morning and I still had 'chance 2'. However, by 9am the weather had taken an about-turn. The sky went black, the heavens opened and the thunder rattled.
It was this weather detail that made my 'bird friend' shake his head.
"What, in this weather?!" was his reply when I told him I must find an owl, and TODAY.
However, he did give me a tip-off.
6.30pm the weather had perked up and I was back on the road to the location of a nest-box where a pair of owls annually take up residence, and I was pretty much guaranteed seeing one, even if it was a face just peeping out of the hole. As I sat and waited, my camera set on a tripod with the remote release, I hoped for a little white face to put in an appearance and thought, in the circumstances, how much more preferable this would be to a picture of a collection of ceramic owls. I then thought about 'plan B' and gave myself half an hour for something to happen, or I would have to leave and go to that alternative location.

After only 15 minutes of waiting, I thought I saw a change in the colour of the darkened doorway-hole to the nest box, which was some considerable distance away and at the extremities of my lens. Were my eyes fooling me after fixing my gaze on such a small target for so long? What had I to lose? I fired off three shots before doing a spot of essential 'chimping'.

I had it! First shot! The rounded white face of the resident barn owl. Yesss!

Ok, so it would win no awards, but it was a real, live owl, and not the scary plastic decoy owl guarding a tucked away veg patch, which would have been 'plan B'. With a feeling of satisfaction and knowing I didn't now need to dash off after half an hour, I afforded myself the luxury of waiting for a better shot.

You guessed it - I didn't get one.

That's the way of wildlife photography, and that is what I love about it - always needing to do better. It's what helps keep us sharp.

So, Ian, after I suggested to you today that I might have to resort to 'plan B' I do hope you're happy with 'plan A'?

Again my thanks to: