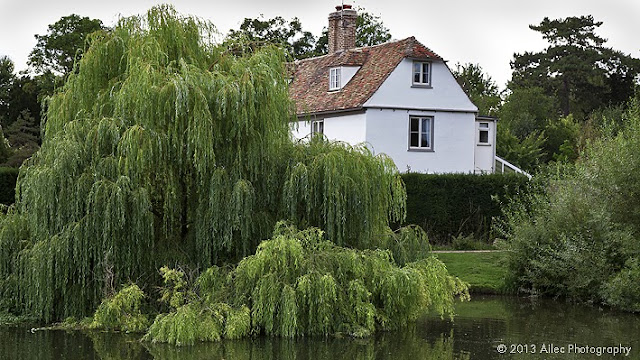 Today I have gone for the traditional picture postcard look. After all, weeping willows are part of the scene in the traditional English countryside, and where could be more traditional-feeling than Byron's Pool in Grantchester, on a summer Sunday. Families were quietly fishing around the waters edge this evening where, apparently Lord Byron would swim. This fact is said to have been written about by Rupert Brooke, the Edwardian poet, who, many years later, lived in the near-by Old Vicarage.

Unfortunately for me, the sunshine, which had earlier been playing through the weeping branches of the tree, decided to curtail its appearance as I began to photograph at the pool. Unlike the picture postcards of yesteryear, I have refrained from hand tinting the sky, even though Photoshop would be the perfect tool. I prefer to leave as-is as much as possible. One day I will return to capture the image with a perfect sky, but for today, I'm afraid I will have to present a less than perfect white sky.

My thanks to:
Ian for the suggestion