A Pack of Stoats 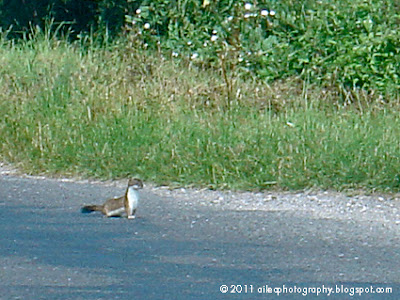 I just hate it when I have the wrong camera with me (or worse, no camera at all) for when something interesting happens.

This morning, on our way to a dog walk venue, my better half spotted a goings-on in the middle of the lane. As we drew close, we realised it was a pair of stoats, fluidly writhing with acrobatic skill. Stopping and reversing up onto the verge, we sat and watched the comical pair, reminding us of the hours we had watched our own pet ferrets (sadly no longer with us) playing in a similar way. Not surprising really as they are both from the same Mustelid family.  As we watched, two additional pairs also joined in this game of dare to cross the tarmac in the most acrobatic way. All of them took turns in taking cover in the verge, particularly when any form of wheels came towards them, and re-emerging for another performance when the coast was clear.

Having only my p&s with me, they were all playing just that bit too far away for a decent shot, (my apologies for the poor image above). So, I thought their antics might be better suited to a recording in the small mpeg files the p&s can produce. Sadly they were still just that bit too far away and the quality is poor. If only I had had my 5D mkII with me, who knows what I could have captured through the lens, but as it isn't pocket-sized, the reason for carrying my p&s was obvious.

This frustrating incident today highlights how the replacement p&s that is on my wish list just can't come soon enough. I can feel a G12 shopping trip coming on!

Meanwhile, I do hope you enjoy watching the little film showing just two of the playful stoats from this pack as much as we did.
Posted by Celia at 31.7.11