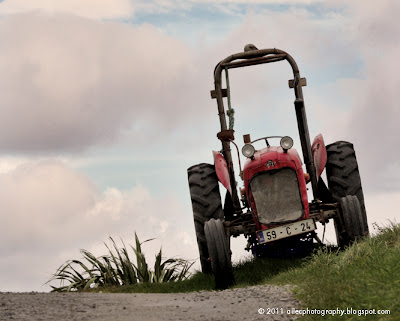 He was a tractor I spotted sat on the side of a West Cork coastal lane and became one of a pair of images I put in my show to represent the changing and fading lifestyles in the region. Once on the wall, it wasn't long before visitors were insisting that,
'The tractor needs a name'
so an impromptu naming game was set up.

There are no guesses as to which name was at the top of the list, and jointly with two others. The rest are in alphabetical order:

then for the girls:

So, why Rodney?
Well, I first had to reflect on the choices. As much as the girls names were lovely, I just didn't see a feminine vibe in there. Again all the boys names were good, and yes, Paddy sums up an Irish tractor but by being joint top it would also make it difficult to decide, so I had to say no to the cliche name.

Now I know what most of you are thinking... Only Fools and Horses.
Well you would be thinking wrong.
For me Rodney has one very strong connotation, and that comes purely from being a 'Black Country wench'
Where I grew up, Rodney would actually come up in conversation as a verb. To 'have a rodney' would imply that an idle or maybe lazy time was in progress, such as you might have at a weekend when you are still in your PJ's at 11am. It could also be directed more emphatically at someone who perhaps didn't pull their weight.
Either way, Rodney just struck that chord and seemed to sum up this lonely little mechanical chap standing idle.
Upon looking up the name Rodney, I discovered that this English name actually means 'land near the water' Regardless of being an Irish tractor, here was an appropriateness again as it was indeed standing on land near the sea.

So there you are, Rodney it is. Oh, and thanks to A. Hawkins for the suggestion. (I will be getting in touch)
Posted by Celia at 26.7.11