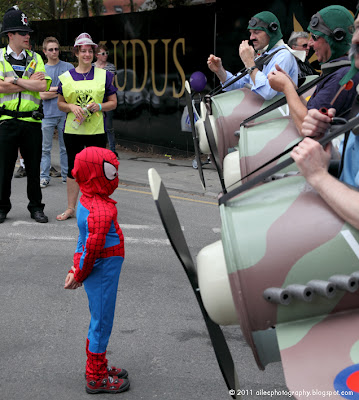 Today, Saffron Walden was yet again blessed with fine weather for the Carnival Parade.

Held every three years, the parade has apparently taken the accolade in the past, for the largest town carnival after Notting Hill. This year there was certainly a huge selection of participants, working with the theme of 'Heroes'

Taking well over an hour to pass by one spot, and three hours to complete the town circuit, there are inevitably moments of hold-up. At one such hold-up we were able to observe the most amazing rig-outs a local street had obviously spent hours producing for their men-folk. I have to say these were highly original and were my favourite, although there were several other note-worthy entrants. (I will post an album of pictures from the day in due course)

For a brief moment during in this hold-up, Spiderman was seen to be having a face-off with WW II fighter aces, and with no intervention from the hand of the law.
Posted by Celia at 2.7.11