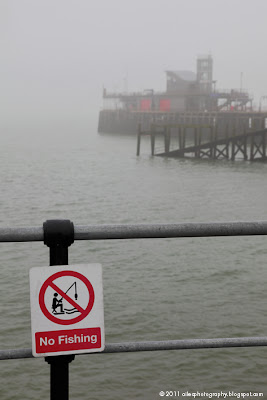 Today we thought it might be a good idea to show some visiting Americans the delights of the British seaside. For one reason or another we had to go to Sunny Southend on Sea or 'Sarfend' as the locals call it.
One thing that failed to make an appearance was, well, as you can see, we couldn't see. We took a ride on a little train, 1.341 miles out into the Thames estuary on the longest pleasure pier in the world, where neither Southend or the north coast of Kent were visible.
Just four of us were fool enough to make the trip into this cold damp nothingness and opted to take the return ride just five minutes later.
Posted by Celia at 15.3.11