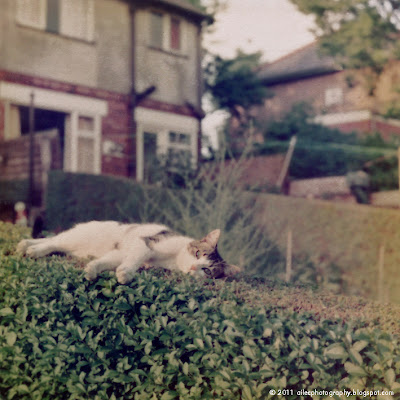 Where did I begin with photography?
Well, right here with this picture of a dear old cat called Judy.

One May evening when I was barely twelve years old, my aunt threw down a challenge.
"I wish we could get a picture of my cat lying here on this hedge"
I thought for a while, ran back to my home nearby, and breathlessly asked my dad if I might be able to borrow his camera. Fully expecting a straight refusal, he calmly asked me instead what I was planning to take with it. I had to explain as quickly as I could, concerned that the fickle feline might decide to change her location of repose. Mindful of the urgency, my dad felt it was still important to take a moment for a quick lesson in how to use the Agilux agifold, loaded with a 2 1/4" square roll film.

As he set the basics, he gave me piece of advice which was incomprehensible to me then but has got me out of trouble on more than one occasion since.
"If you don't know what F stop is going to be right, set it on F8 as a good measure"
With the camera opened up, wound on and set at F8, all I needed to do was calculate focus, point and then press the shutter.

On my return to the location, I was relieved to find said cat still doing what they like doing best. So after judging the focus (no auto-focus here) I positioned Judy in the viewfinder, held the camera as still as I could and squeezed the shutter button. In a moment of recklessness, I dared to wind on the film for just one more picture, and that, as they say, was that.

As was the norm back then, it was some months before the results of my photographic initiation were revealed. It was as it was; a cat on a hedge. But no one had warned me about parallax. I had thought that Judy would be beautifully positioned in the middle of the frame, instead, she was down and left a bit. (Actually, a nice bit of rule of thirds!) This was lesson number two, don't trust what you see in the viewfinder unless it is a TTL. (TTL came much, much later for me though) F8 had done what it needed- allowed a reasonable focus on the subject and thrown the background out of focus a little. Here was my first photograph.

So, I began with a cute domestic cat, and never in my wildest dreams then, would I have expected myself to be looking down the lens at some amazing big cats in their natural surroundings, some thirty-five years later. 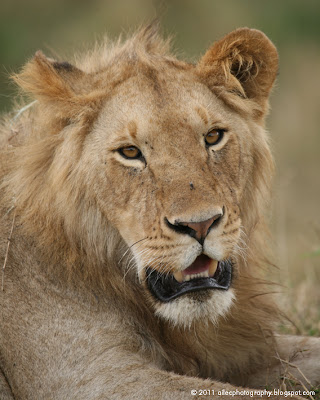 I feel exceedingly privileged.
Posted by Celia at 4.3.11