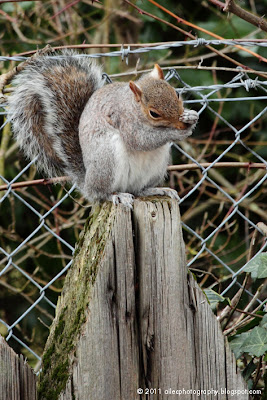 On my way to the park with mutt this morning, I passed a group of workmen busy removing a sick old beech tree. Whilst two men stood below, the third was around twenty-five feet above, cutting off limbs, dropping them to those below then letting his natty little chainsaw swing down casually from a cord that was around his waist. He didn't seem at all worried by his position, just as the squirrel I had watched from my bedroom window earlier, hadn't been worried about carrying a pillaged bird-table peanut in his mouth, whilst running at speed along a telephone wire.
They both looked equally at home - man in a squirrel's environment and squirrel in a man's environment, but I think I know which one looked more naturally at home.
Posted by Celia at 22.3.11