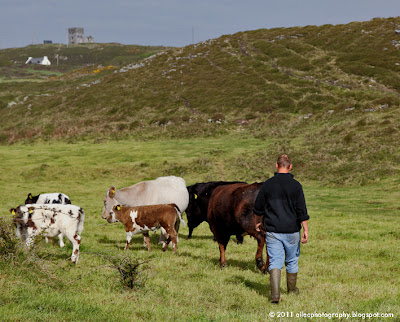 Now that I am back at my normal computer, I can start to properly edit the images I took during my latest visit to West Cork. Whilst there, I did manage some editing of a fashion on my relocated, old, slow, G4 Mac with an off-cast flat screen. This is actually a considerable upgrade from the old iBook I had been using and filling my hand-luggage with each trip. So, whilst it is frustrating hitting the 'go' button and having time to go and make a cup of tea during the wait, it is not half as frustrating as the screen. As I have left my 'good' screen coupled with the replacement Mac Pro, it was a case of finding a spare screen to leave with the G4. The only one available was an old Sony, once used by my better half, but discarded due to 'the odd colours'. Nothing that a bit of careful setting up couldn't sort out - or so I thought.

Once into the settings, I found that the red and blue channel were adjustable but the green channel actually did have nothing to declare by being impossible to adjust. This left the screen with a rather strange colour cast that fluctuated according to how long it had been turned on. I fast came to the conclusion that this was not going to be a permanent option for a computer used predominantly for photographic and design work. A replacement is to be found and I will gladly confirm that the screen does indeed have 'odd colour'.

I can't tell you how much I appreciate my good screen, with a clear sharp image, that also has a regular liason with a Colormunki. The above image was one that I chose to work on whilst away, but needed a total overhaul before it would even see the light of another computer screen. However, with a re-jig back here, I can post it with confidence now.

Looking back on the images from the past few days, it is clear that they are rather odd in places, and for that I do apologise, but I am also pleased to announce that normal service has now been resumed.

(My thanks must go to the neighbouring beef farmer who kindly allowed me to tag behind him one morning so I could fulfil the last part of my documentary study, before pulling it together for the summer show.)
Posted by Celia at 14.5.11