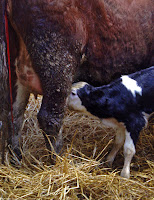 What a day! I have been progressing with the planned documentary work, starting with a chat to a young, beef cattle farmer, who despite currently having to run the farm alone and look after a toddler, he has the most refreshing cheery disposition. His wife has just spent the last few days sitting up in hospital with their poorly baby daughter, and yet he still has a smile on his face and declares that farming is the best life. People with this sort of outlook on life deserve to succeed and I wish him and his young family well.

Dropping by the dairy farmer again this morning, he pointed out a young heifer who's first calf would be born within the next few hours and I was hoping that I might be fortunate enough to be there for this new arrival. To kill time, I spent lunchtime photographing the wide variety of birds visiting the nearby strand. In half an hour I spotted two types of gull and the hooded crows that are always present as well as a rock pipit, oyster catcher, pied wagtail, sandpiper, redshank and a shag with its prominent breeding season crest. In the same half hour there were three other bizarre visitors. Firstly a power-walking lady who sent all the birds up into the air in a flurry as she marched from one end of the strand to the other - six times. Then a man who drove up as close to the strand as possible, off-loaded a wheelbarrow and shovel, then proceeded to fill the barrow with sand before re-loading it into the back of his van. Finally, an elderly man who also drove up as close to the strand as possible before selecting a carrier-bag full of stones with these also ending up in the back of his car. Too many interruptions for my liking, so time for me to move on.

Returning later to check the progress of the heifer I, and more so, the farmer had been surprised to find the arrival had happened sooner than expected for this first-time mum. We had both missed it. For me, it is sad as I am running out of time to catch one of these special moments. For the farmer, it is only the beginning of this annual rural cycle, with just one more new life.
Posted by Celia at 9.2.11