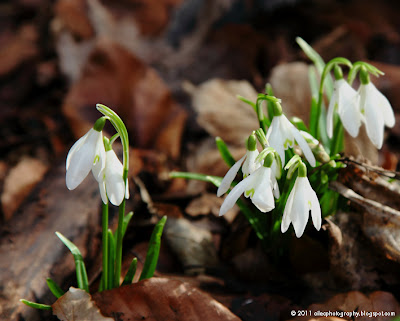 We are finally pulling away from the dreary January of 2011 but even the snowdrops have had a struggle to blossom-forth this year. Apparently it was the cold December and the subsequent frosts that have delayed the annual snowdrop season at Anglesey Abbey in Cambridgeshire, until now.

With over two-hundred different varieties there, they really can give a spectacular show, and when the weather is sunny, as it was yesterday, there isn't a parking space to be found. So that is why we (unsensibly) visited today, when it was colder, overcast and threatening showers. By getting there early, we also hoped to miss the crowds, which thankfully, we did as on our departure the carpark was just filling. (First redeeming factor for the choice of day) Later, on the drive home, the windscreen wipers came into operation (Second redeeming factor). So, all things considered, it wasn't so bad!

The snowdrop display truly was worth the visit, despite the weather, and with a Winter Garden full of stunning bark colour, we were still able to pass a delightful few hours. For photographic purposes though, the weather conditions today were less than ideal. The stiff breeze made the dainty tutu-like flower heads dance faster than Darcy Bussell in a pirouette. The lack of sunshine was as if someone had forgotten to add the lime to the oxygen and hydrogen mix for this outdoor stage, and then...

A drop of sunshine fell onto these pretty flowers giving us a momentary drop of delight.
Posted by Celia at 15.2.11