So you didn't believe me?
True to my promise, I bring you a posting on this rural happening. 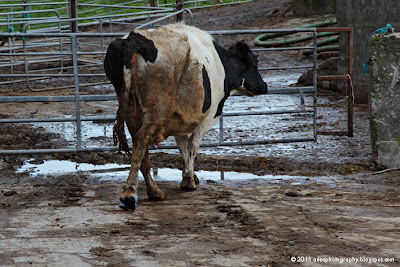 Joking apart, this was one happy lady earlier this week. Not only was she glad to get out of the restraining crate, but it would have been a great relief to her having had the damage to her hoof treated. Just as we can damage under the quick of our nails, so can cows. Very often, the damage can cause the hoof to over-grow in an attempt to compensate. Here, she was having the damaged area cut away, before a foot lift was glued to the healthy half, giving it a chance to heal.

This cow, at around 14 years old, is the oldest in the herd and it had been noted that she wasn't walking well. The mobile 'foot doctor' had been called in to treat her and two other cows that were also having foot problems. In the past, this would have been a highly dangerous operation, with the cow often only held with a rope. Now, with the use of a mobile, hydraulic restraining crate, it makes the job much quicker and safer.


(I hope this oversized posting will make up for not bringing you a posting on Thursday. This was unfortunately due to the unfolding tragedy at Cork Airport and my subsequent pre-occupation in getting to Shannon in the quest to fly back to the UK. I am pleased to hear that two of the injured have now left hospital and hope that the remaining four may make a satisfactory recovery. Cork Airport is now open again and the investigation into what caused the accident is well under way.)
Posted by Celia at 12.2.11