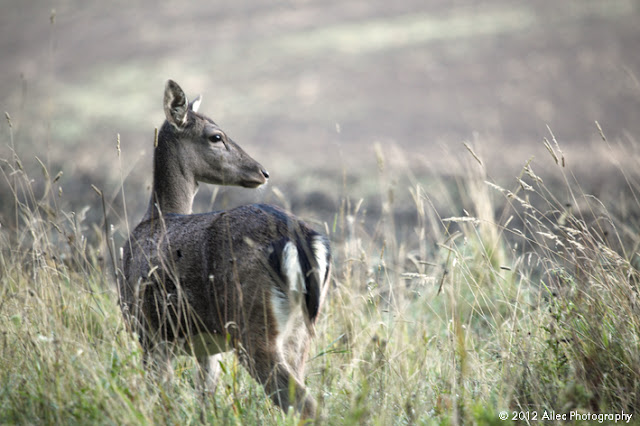 It was noticeably colder this morning but it was dry. A chance then, that the fallow deer might just put in an appearance. Afterall, from where I sit, I can see at least two rutting scrapes and countless deer paths so I know they must be active in these parts.

Way off in the distance, the Muntjac were barking again. The cockerel was starting on his doodle-doos and the light levels were just lifting enough that the blacks of night were becoming shades of grey.

But still no sign of the Fallow deer herd. I watched as the fifty shades of dawn-grey started to develop into colours - first the light straw yellows of the grasses next the darker red-browns of the ploughed ground. And then, on the far side of the field at the edge of the woodland, I was aware of movement. A ghost-like shimmer of a white doe foretold of the presence of a herd of about fifteen ladies. Gradually they ambled over to the scrape, their dawn-lit forms playing tricks on my eyes. I could only watch and wait. It was too far away and too dark to contemplate any shots so I sat back in my place. To my surprise, whilst this was going on, three does had crept into the space just in front of where I was sitting, and were proceeding to give this camo-netted oddity a quizzical stare, before once again, creeping back into the nearby woodland.

The deer were on the move- hooray! After around ten minutes, the far herd began to move vaguely in my direction. I followed their progress through my viewfinder and then HE walked into frame. A splendid buck with mature palmate antlers, and he was walking straight towards me. This would normally have been a perfect situation to fire off some shots, the antlered form gradually becoming larger within the frame. However, my suspicions were confirmed with the slight depression of the shutter button. A 3 second exposure. Not even worth a try. Reason one, blur. Reason two, shutter-noise startle and lose them completely. Again, I could only sit and watch whilst listening to the bellow of another Fallow buck somewhere off in the distance.

The buck and his harem disappeared off again and I was content that I had finally seen some activity. As I sat, a few more does appeared in front of me. Just 10 metres away and it was worth a try at a shot. Two frames, with the shutter seemingly taking an eternity on 1/5th second, resulting in the shot above. The dawn light still not enough to provide illumination on this stage. It was really only going to be a watching day and I was also starting to see my breath, indicating the dawn drop in temperature. By now I was actually starting to shiver for the first time this deer-watch season, high time I should contemplate a steaming mug of tea. As I was about to pack up for the day (as visitors would be arriving later in the morning and I had domestic jobs to attend to) I noticed a lone deer on the far side of the field.
A quick (and poor) ID shot revealed it was the buck. 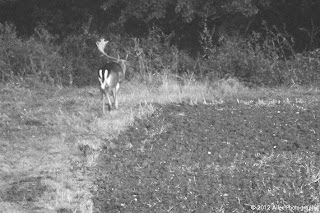 (Someone asked me the other day,
"Why not go to Hatfield House or Richmond Park to photograph the deer?"
Errm, hasn't that been done before?! That is, dare I say, just a bit too easy. I prefer a challenge. I'm watching a cautious, suspicious local herd who are seldom subjects of the camera. The long fruitless waits will be worthwhile when I successfully bag the image I'm after...
...whenever that might be. That's wildlife photography!)