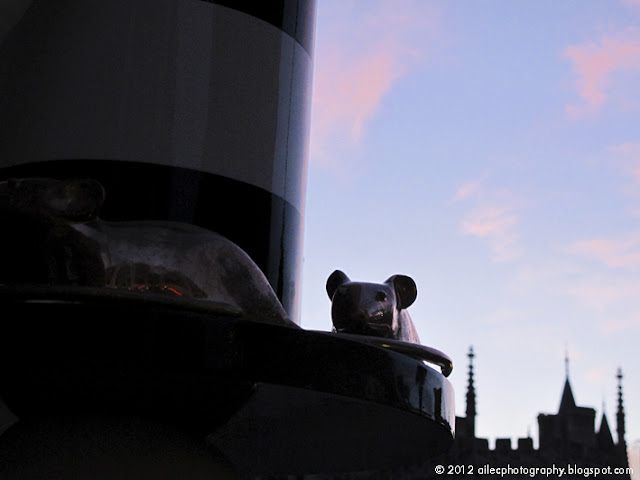 Yesterday evening was the first time I have visited Cambridge since the Snowy Farr memorial sculpture was unveiled on 7th August, so I was keen to take a look at the artwork which has been in the pipeline for so many years.

For those who don't know about Snowy Farr here is some background about him. For all those visitors to Cambridge pre mid-nineties, we will all have our own memories of this eccentric character who, for charitable purposes, had a regular spot down Petty Cury.

The monocle-wearing, white bearded man, dressed in a distinctive red military-style suit and wearing a top hat, would arrive with his little handcart containing his animals, which were also white to match his beard. Once set up for the day, the cat would then be perched on the top of the hat, whilst the mice fearlessly ran around the brim. Occasionally, one of the mice would make a foray up the long white beard and half disappear into Snowys mouth.

It was exactly this eccentric spectacle that helped him raise thousands of pounds for charity, so when in 2007, Snowy Farr passed away, it was only natural that there was a call for a memorial. Over the following years, I observed in the local press, the progress from suggested designs through to selecting the piece to be commissioned. I remember at the time of selection feeling that there was only one that should be chosen from the shortlist, and indeed this is the one now standing at the Market Hill end of Petty Cury. 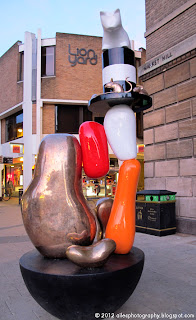 It raised eyebrows at the time and it is still raising countless eyebrows in the letter columns of the local press, now that it is in place. Why should this be?
It seems many wanted a facsimile of this amazing character - a statue in its most obvious form. Clearly here, the hat and the animals are the most recognisable part, with the 'jelly bean' forms being representative of his handcart, the red uniform and the white beard.

To help settle this in my mind, I went back to the proposal document submitted by the artist Gary Webb.

"For this project I didn’t want to make a formal, serious, figurative sculpture like Nelson on a column or Churchill on a pillar. Snowy Farr wasn’t that kind of guy: I wanted to bring the fun back and make something much more engaging and memorable for all ages, but especially children as he seems to figure in the imaginations of all that saw him when they were young.

This sculpture needed to be abstract because he was an abstract, eccentric English character. I also wanted to emphasise Snowy Farr’s instantly recognisable features and colours so that they can continue to bring that extra bit of spark to Cambridge like they have done in the past. The sculpture has a plaque and also an active collection box which will celebrate Snowy Farr’s achievements and make his contribution to charities for the blind not only acknowledged, but also ongoing. The size of the sculpture is human sized but in a slightly larger-than-life scale, like the man himself."

I think Gary Webb summed him up perfectly and having read his proposal, I am now (almost) perfectly at ease with the finished, remarkable and distinctive work. Despite the criticism, it appears that the public are already relating to it and the charitable collections that Snowy Farr is remembered for, as donations are being left on the plinth. Why on the plinth? Because the collection box was omitted, as apparently it was deemed too difficult to manage the emptying by the City Council. Instead they are asking people to make the extra effort to go into the nearby Guildhall (if open) where the charity collections are taken. As if people will? Most just want to pass by, and on a whim, anonymously drop a coin or two into the welcoming slot at Snowys feet - just like they always used to. In my opinion it is a huge oversight on the part of the Council and fully expect to see the retrospective addition of the charity box very soon.

Taking a look back at the maquette, I could see why I wasn't quite at ease with the finished work. Apart from the omission of half a mouse from the beard area, I can't quite understand the use of orange instead of the proposed red for the uniformed body. Both changes from the proposal probably haven't helped with the acceptance by those members of the public who struggle to find artistic vision and understanding.

I have to admit I am won over and feel it is a fitting tribute to the man. This tactile, hugable colourful sculpture will prompt many a child to ask "Who? What?" and beg "Lift me up to see the mice on the hat!" It will stop adults in their tracks, make them think and remember. Best of all, I'm positive it will grow in everyones affections.