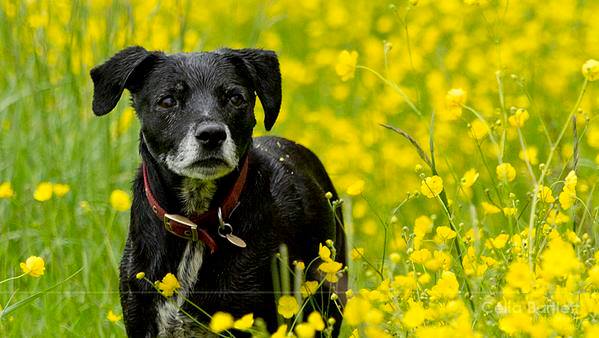 
To many of you she was Mutt, others may have known her as the 'Photographer's Assistant' but to us, she was our Penny.

And on what better day than today - National Dog Day, should I post a tribute to the old girl.

On Monday, after just over fifteen years of being an amazing member of our family, we had the difficult task of saying goodbye. Her failing health meant that it was kinder to let her go... 'chase rabbits' elsewhere.

On the 8th April 2002, along with our two young daughters, I went along to the local rescue home to look at a particular puppy and instead, met a gangly Lab/Staffie cross who had been brought in as a stray. She was both curious and waggy, and after a walk with her on the lead in a nearby field (she most definitely leading us) we thought that she might just be a suitable choice. Although suffering with conjunctivitis at the time (a condition which gave her a permanent weakness in one eye), she was alert, friendly and definitely trainable. However, as she was to be a family member, it would be down to himself to give the final nod.

A couple of days later, the two of us returned to take her for another walk around the field - or rather, she was to take himself around the field. Unbeknown to me, he had a pocket full of ferret biscuits which during this meeting, he was using to his advantage. And there, a bond was made.
"She will do"
were his words and with that, wheels were set in motion to bring this nine-month old mutt home with us. Being a stray, they could only guess her age and working it back, it appeared she might have been born around July 2001. Instantly daughter no.2 picked up on that point and announced that she could share her own birthday, which delighted her greatly, and so began the assumed* birthday.

However, the friendship between youngest and the puppy was to become a special one, not least because it was down to her hard work at school that a puppy was even considered. Having already grown up for 8 years with a family pet cat, she asked if she could have a puppy. Eyebrows were raised but himself made a rash promise.
"Get your spellings right for a whole school year and we might just consider it"
And what did she do all the way through year 5? Pushed the results from 4-5/10 to 7-8-9/10. She really did put the effort in, and with every parents evening throughout that school year, her teacher would ask
"When IS she going to get this puppy - it is all I hear!"

During the winter of 2001/2, we had said goodbye to the old cat and youngest daughter was quick to pick up on the fact that having an old cat was no longer a legitimate excuse not to have a dog - an excuse which had often been given previously. And so it came to pass that a near nine-year-old was about to have her dream fulfilled, although secretly both himself and I were delighted to have a new family member too. Meanwhile, eldest daughter did her best to appear miffed that her younger sister was getting her way but now it appears, she was equally delighted to have a puppy join the family.

Having been given the temporary name of Penny in the rescue centre, we all agreed that actually, she was indeed a Penny, decided to keep the name, and brought her home to a new family life.

Every Sunday morning for the next two years, I would drive to the 'Hot Dogs' training classes some 28 miles away, where a young girl put a strong-minded yet loving puppy through her training paces. There would be tears, laughter and just rewards for both girl and puppy. Meanwhile, I was watching the training methods too and putting things into practise during the hours of daily walks I was to do with Penny.

Email ThisBlogThis!Share to TwitterShare to FacebookShare to Pinterest
Labels: dog