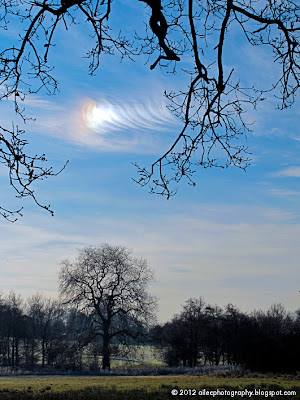 Whilst out enjoying my walk on another crisp, bright, sunny morning, I wasn't too surprised to see some cirrus clouds in the otherwise clear blue sky. However, I was surprised to see the feintest show of a rainbow next to a bright light, to the right of but at the same height in the sky as the sun. I knew that this phenomenon would be caused by the light catching the ice crystals in these clouds high up in the atmosphere, as back on 11 December I featured a moon halo formed by the moonlight passing through ice crystals high up in the atmosphere. So a similar circumstance, although this time caused by the sun.

I do recall seeing this occurrence before but had no idea until I checked it out on my return home, that it is known as a Sun Dog Details here. I was unable to see the corresponding spot to the left of the sun today, but was delighted to see this one none-the-less.

After a few minutes, the rainbow-light disappeared as the sun moved up in the sky, sending it's warmth the melt the frosty covering on the ground around me.
Posted by Celia at 17.1.12