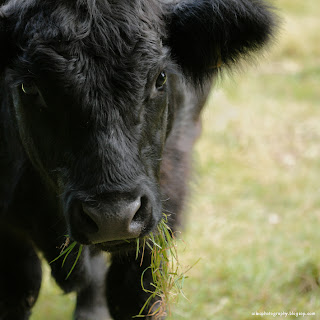 Whilst still on things bovine, I thought you might like to see a lovely young fella. He was one from a herd of Galloways I photographed last August. They are farmed organically by a friend of ours in Ireland and I understand that they are much more trouble-free than some of the other traditionally farmed breeds. Being hardy, they can easily tolerate the harshness of the weather that we, and unusually, the Irish have experienced this winter. Able to live off poor ground, the mothers calve easily, have abundant milk and the breed produces wonderful beef. Sounds perfect. I have to say, I was particularly taken by their lovely wooly coats and curly hair-dos though.

So, why so much interest in cattle? Well, I began a documentary project last year, focusing on the changes in dairy/cattle farming in a particular corner of Ireland. These changes have happend in less than a generation and will have implications for many generations to come. I am keen to capture some of this remaining lifestyle before it disappears completely as well as photographing the moves forward, such as that, our friend has made.

Having a number of photographic forays already in the bag, I still have several trips planned to continue with this project. I will endeavour to keep you up-dated with progress although I guess this project will be on-going, with the end difficult to define. However, I hope to be able to share the results with you when I bring the Galloways together with the other bovine encounters, later this summer, in a documentary photographic show.
Posted by Celia at 24.1.11