(Photographically, this isn't to be the most excting blog post but there is a film later...)

It had been a familiar aspect of the Saffron Walden County High School for many, including ourselves. The triangular glazed lobby was passed through on many occasions, be it to drop forgotten items of school paraphernalia to one of our off-spring, or latterly, as the entrance to the towns' excellent community cinema Saffron Screen

Around two years ago, the old entrance was closed off and the school hall, which had been built in the 1950s and had out-lived its usefulness, was pulled down at the beginning of an ambitious plan to provide the school and also the town with a world-class facility.

Saffron Hall will be a flexible state-of-the-art hall with equipment to match and exceptional adjustable acoustics. It will open in late November 2013 and provide a home for concerts, plays and other events of all shapes and sizes - a programme combining school and amateur events and performances by professional artists and ensembles of national and international stature. The Hall will have a maximum seating capacity of 730."


Whilst on my daily walks in the near-by park, I have been watching and indeed, listening to the noises during the construction process of this new building. The townsfolk have endured wrangles with parking issues created as a result of the building work, and the cinema-goers have had to adapt to the changed access to Saffron Screen. So, to find that the new hall is nearing completion is music to the ears of many. And are we excited about it? Well, I can't speak for everyone, but for me, I'm certainly looking forward to enjoying the new facility. Last night I caught up with the second of two films documenting the progress of this project. Judging by the information given, it is sure to give some of the other venues, both local and further afield (with one, which will remain nameless and has the most dreadful acoustics) serious cause for concern. This second film shows just how versatile and exciting this top-class hall is going to be - and it is in our town.


Take a look at this fascinating little film for yourself 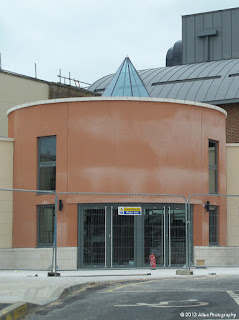 Enter Saffron Hall by clicking on the image

So, no more uncomfortable church pews; views obscured by pillars; muffled music; lost voices and the end to driving miles for a good gig.