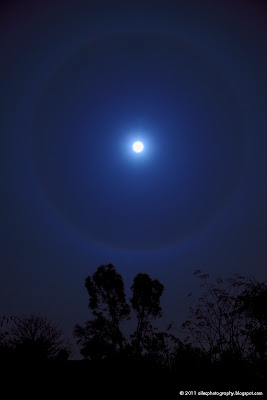 2011 has been special in the lunar eclipse calendar as there were two occasions when a total lunar eclipse occurred. The first was on 15th June, when, you may recall, I attempted to photograph the event - with little success. (See Totally Eclipsed) The second was yesterday, 10th December, when once again, due to unsuitable weather conditions, the event escaped my lens.

However, I have not come away from the event empty-handed. My better half was returning from an evening out when he beckoned me to go outside at 10.30pm, and "Look at a ring around the moon". It was certainly worth a try at a photograph, so quickly donning some warm clothes, I plonked the camera on the tripod and took a series of images on different exposures and time settings. Eventually a 30 second exposure provided this image, with just a few simple post-production adjustments of the levels.

Instead of a lunar eclipse, I had captured a moon halo a phenomenon that occurs due to the presence of ice crystals high up in the atmosphere. Whilst not the red-eclipse moon I had hoped for, it was something equally beautiful. (Even if it is supposed to foretell bad weather)

So, until 15th April 2014, when there will be the next opportunity for a total lunar eclipse, (if I am in the right continent at the time) here is my version of the December lunar eclipse.
Posted by Celia at 11.12.11