Police are maintaining a cordon overnight after a section of a recently erected crane, collapsed on a building site in Saffron Walden. The incident happened late on Friday afternoon and residents in a nearby block of flats were evacuated as a precaution as increasing winds caused a safety concern. Fire crews initially assisted with emergency lighting and helped with the evacuation but left the scene at around 7pm.

It is not yet known what caused the crane jib to collapse. 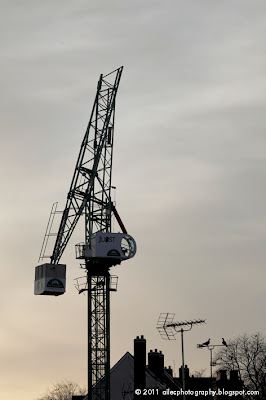 In the light of the morning, it is clear that the jib has broken backwards and there is damage on the platform below the cab.

(For those who may be viewing this post as part of the on-going investigation,
further images may be available by contacting Ailec Photography)
Posted by Celia at 24.12.11