Lighting up the Way 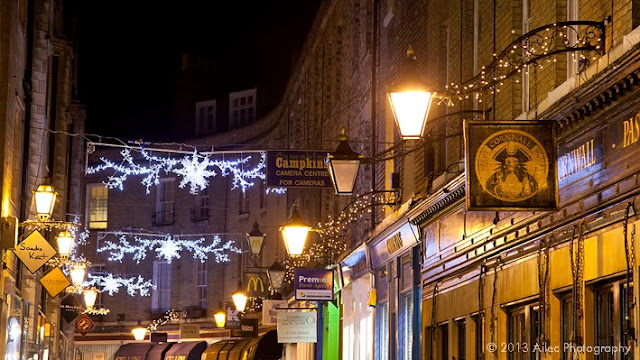 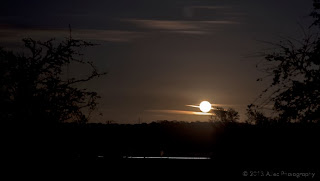 It was already a cold old evening when I left home at around 5.30 to go to a meeting in Cambridge on Tuesday. A huge disc of a yellow moon was rising in the clear sky, lighting up the way.

As I had my camera gear with me anyway, and without setting anything up, I grabbed a hurried but timed shot of this striking moon from the side of the road, whilst the evening homebound traffic streaked by. My haste created nothing but a frustrating burnout.


As I drove on towards my destination, gritting lorries passed me. It really was going to be cold, typically just as I was embarking on an outdoor shoot.

The 'Big Switch On' in Cambridge had been on Sunday but as the lights wouldn't be going anywhere for a while, I wasn't too worried - I could catch them any time. And so I did as I ambled through the market square and past the quaint Rose Crescent, the newly illuminated Christmas displays lighting up the way. 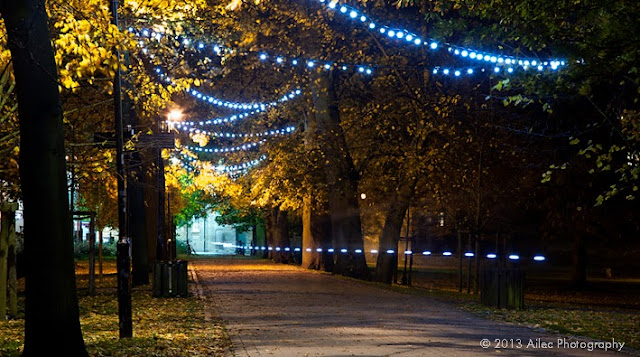 My purpose for the visit was to search out a new feature on Christ's Pieces. I wasn't quite sure where it was located but took a moment to capture some of the lights over the path way. With the leaves still hanging on, (a couple of frosts will see them off for sure and thus change the ambiance) the trees were bathed with a warm light from the street lamps, contrasted with the clear blue punctuation of the garlands of seasonal lights. During the long exposure, the flashing bicycle light added another string of dynamic punctuation to mirror those above, all together lighting up the way. 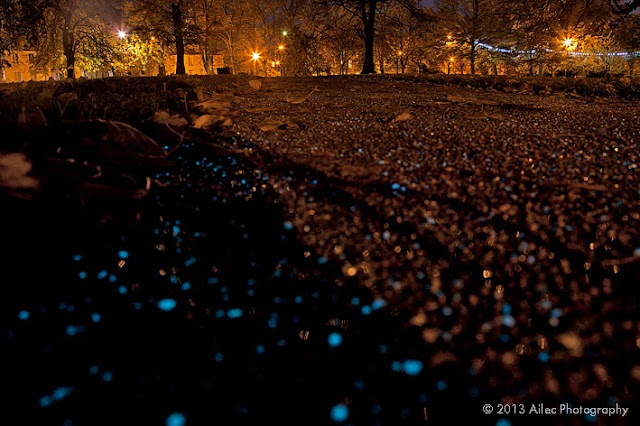 Finally, I found what I was looking for.
At the far end of Christ's Pieces is a world first - and on Tuesday night, it was being rather shy. Overcome by it's sodium cousins, it struggled to shine. For this was a glow in the dark path. I had had to look hard to find it. It didn't jump out at me as I thought it may have done, it was purely the reflective glint of some of the surface particles that gave the game away.

I struggled to find a place or a way to capture the unique surface, which has been on trial for the last month in this public space. On the face of it, a surface that can absorb energy during the day, to give out as light at night, sounds perfect but it was proving less than perfect on the evening I visited. Was I disappointed? Yes. I had hoped to be drawn along a totally way-out glowing path, something to make the brain buzz. Instead I found just a few remaining excited blue particles, desperately trying to light up the way.