The Hunt for Whale October 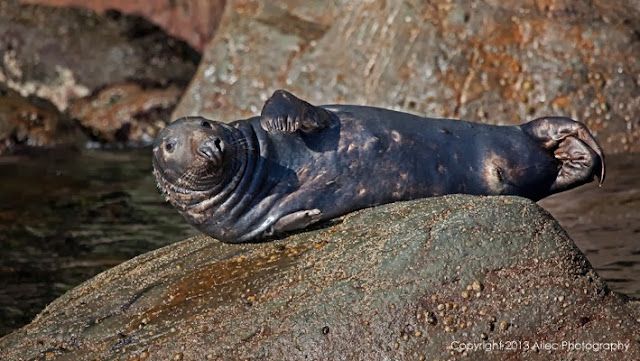 Although reluctantly leaving this years fallow deer rut-watch back in East Anglia, I knew I wasn't going to be missing out on some of the nature spectacles that take place during October, as out here in West Cork the whale season has already kicked off. Having spectacularly enjoyed displays from humpback whales here in the past, I was looking forward to further encounters in this corner of the Atlantic, known as Celtic Sea. No need to travel to Iceland, America and the like, it all happens here on our doorstep.

When not in Ireland, I'm easily able to keep up to date with whale activity via the Irish Whale and Dolphin Group
a conservation and research group, so I already knew that the humpbacks had returned to Irish waters this Autumn. Before Friday, they had last been observed off Slea Head on the Kerry coast, so hopes were high that they might have moved 'around the corner' to the waters within easy cruising distance from where we were to depart, at Castlehaven. As always, we were joining the enthusiastic Colin Barnes on the Holly Jo for one of the Cork Whale Watch trips, and wearing my IWDG hat as well as a visitors hat, I would be looking out for signs of any cetacean activity.


The weather had been less than favourable for whale watching for quite some number of days, so as the first trip out for a while, it would be anyones guess as to where to start looking for the whales. Leaving the shelter of the harbour, we made for the Stag Rocks, where shags, black backed gulls and hooded crows perched. The rocks around this landmark with a cleft secret, were unusually devoid of the basking seals which normally slipped into the water as we passed between its jagged fingers. Instead, they had moved to the tiny caves under the imposing rock which is Toe Head, to give birth to and look after their young, as it is also the breeding season for the grey seals.
Fluffy, creamy-white pups nestled at the back of the caves whilst the mums balanced on top of the exposed rocks, giving us a nonchalant wave as we passed by. 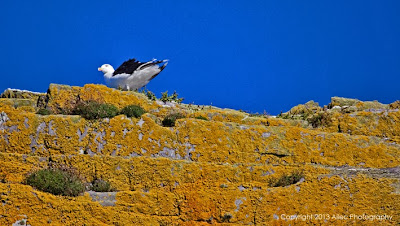 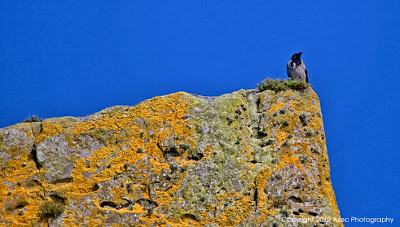 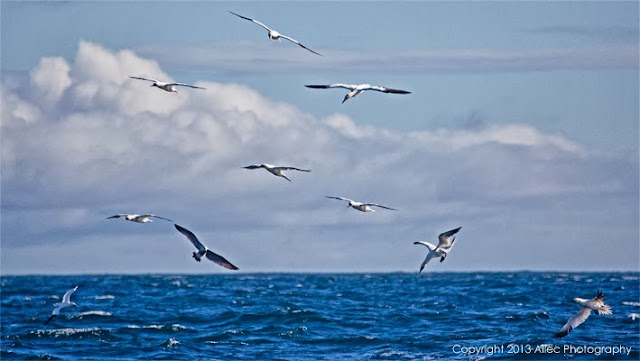 A little further west beyond The Stags, we got our first indication of possible activity. Diving gannets busied themselves as we motored closer. 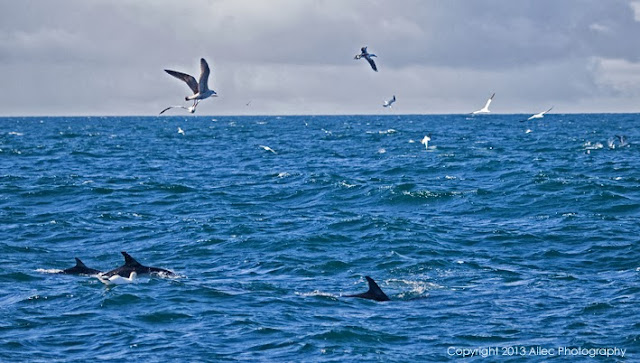 As anticipated, there was associated activity. Diving gannets meant there were fish, and in this case also meant the presence of dolphins... 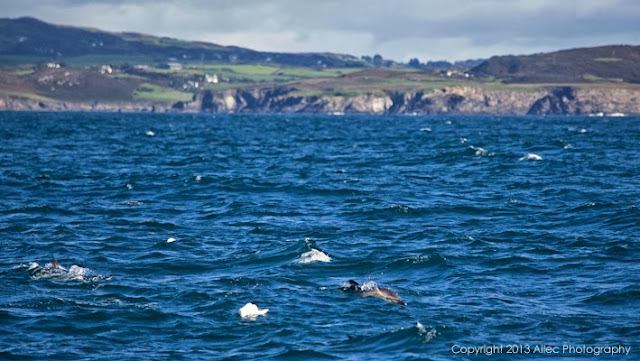 ...and this was all going on in the now choppy waters beneath the headland we call home. 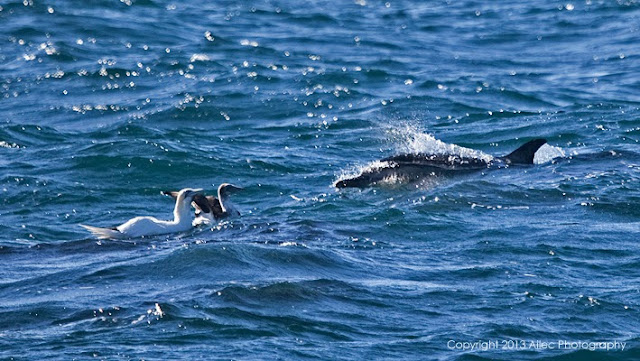 Short beaked common dolphins were bow riding the Holly Jo. Side by side, several mother and calf pairs fearlessly raced in front of the catamaran, whilst ahead of us, more of this pod of dolphins were swimming round and round to form a bait ball gannets and gulls alike taking advantage of this bounty. 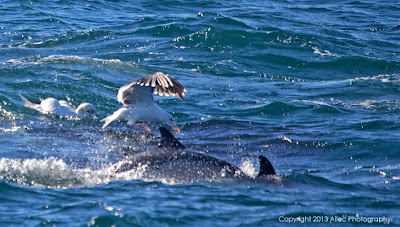 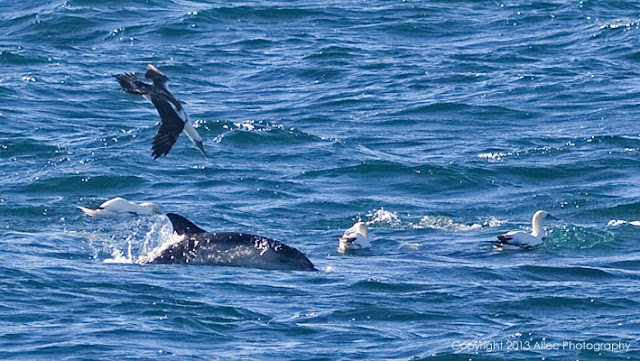 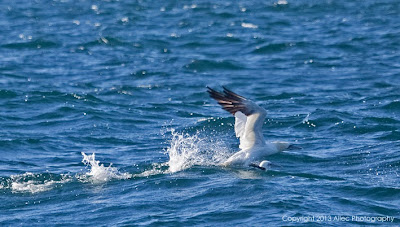 As we watched from The Holly Jo, now bobbing engine-less along-side, two minke whales came in from the east. Excitement rose with this first encounter of the day with whales, that it might lead to a bout of lunge feeding. All cameras were focused on the fish/dolphin/bird frenzy waiting for a huge gaping mouth to come in and gulp down the lunch snack conveniently prepared by the dolphins.
And we waited.
Several times the minke swam up and around, seemingly eyeing up the menu but not once did they attempt a lunge at the bait ball. It appeared they weren't hungry enough to gatecrash this party. 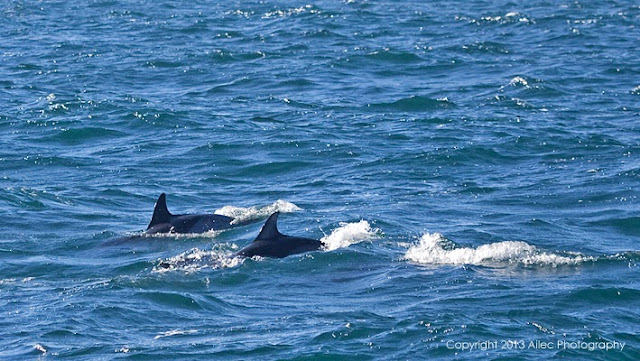 As the tide turned, so did the Holly Jo following the 'big' news Colin had received, and we motored off eastwards. 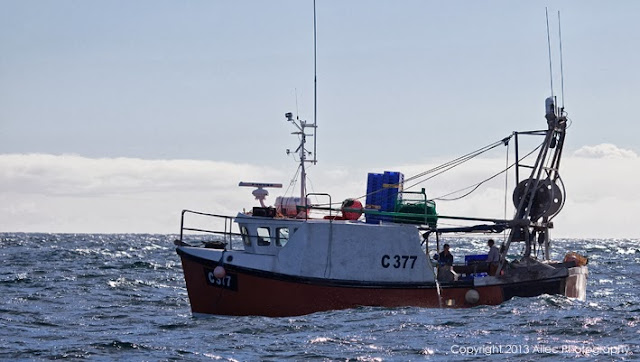 As we drew nearer to the waters around Galley Head, we could see the small trawler belonging to the local fisherman who had called Colin to alert him to the presence of 2 or 3 fin whales, the second largest of all whales. Although reported as 'big' ones it can be surpringly tricky to spot the presence of these large whales, who have the ability to quickly cover larges areas. Twice we missed the tell-tale signs as another call came across that they were right in front of us. And then we saw it. A blow! 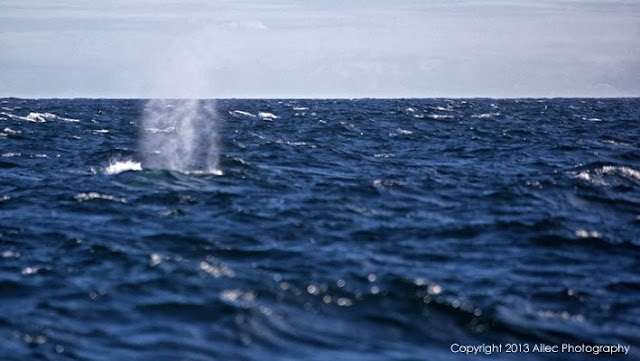 A wind-messed column of vapourised sea water lingered in the air long enough for us all to turn towards the area of potential action. Cameras were raised in anticipation but we had caught the last indicator of this latest surfacing and it would be another nine or ten minutes before they would be likely to surface again.

And so once again we waited, the sea conditions now becoming more difficult, with the little Holly Jo bobbing and rolling in the swell, and taking its toll on several of those on board. I breathed deeply, as I was determined not to miss this opportunity to observe these fin whales as I knew that my secret wish for a humpback sighting was going to be fruitless due to being just too early in the season. 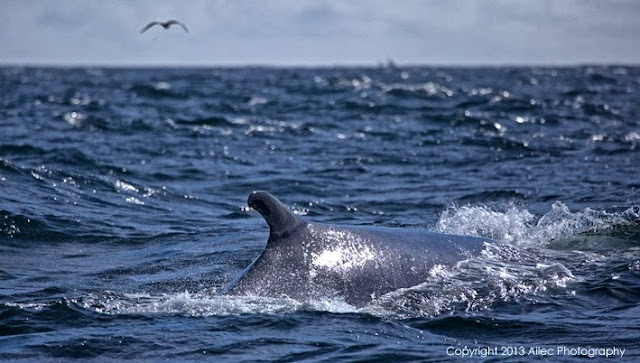 Then there they were. A pair of large fin whales surfaced a few hundred metres in front of us. Shutters clicked away as the swell moved our viewing platform up and down, bringing the whales in and out of view. To capture any shot was going to be a bit of an achievement but I managed a run of four shots, the one above being 'the best of the day'.
You already know from previous posts that I am a realist when it comes to wildlife photography, and I know it can take years to achieve the perfect shots. Sadly, this fin image was a little too oblique to be able to use for identification purposes but I was just delighted that we had had this encounter with these impressive creatures. Delighted also, that after four fruitless whale trips over a number of years, himself had finally managed to observe whales too, and he was happy (if rather green).

By now, my sailing mates Stuge and Ron were doing everything in their power to keep me happy, and not wishing to push my luck any further, I settled myself down quietly on the bench behind the wheelhouse as we began to long roly-poly journey back. In my half asleep state, I was aware we had slowed, and thinking this was the harbour approaching, I paid little attention, only to find out later that there had been fin whales motoring alongside the boat just a few metres away.
You can't win them all! 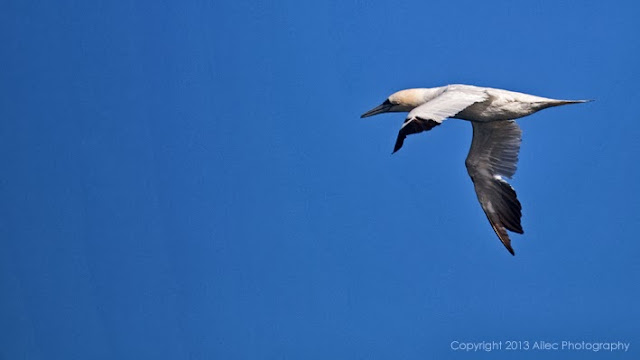 After what seemed an age, my senses then went into overdrive, even with my eyes closed, I knew we had arrived at land - I could smell it! It was a smell I recalled from the very first time I sailed into Ireland nearly twenty years ago, and a smell I have smelled almost every time I have sailed in since then. For me, it is a comforting homely smell, for others, just the smell of muck-spread fields but on this particular day, it indicated the end of a successful trip to encounter these amazing monsters of the sea.

If you would like to see fin whale action from the Holly Jo but don't have sea legs, then you are in luck!

BBC1 is currently airing a series called The Great British Year where it reveals a portrait of the dynamic nature of Britain over the course of one year. The final episode to be screened on 23rd October covers Autumn, and back last year, the film crew went aboard the Holly Jo with Colin, to capture the fin whale footage that will be shown (check out images 10 & 11)