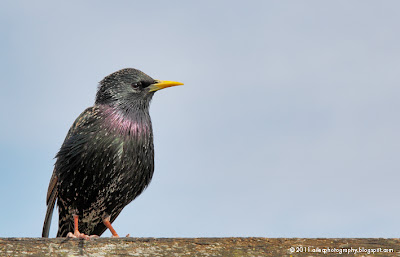 A visit to Stonehenge at the weekend gave me an opportunity to get up close to a bird that used to be commonplace in all of our gardens - the humble starling. Gone are the days when they were always first in the queue for the breadcrumbs. That accolade now goes to the bird-scaring wood pigeon. Bird-scaring because small birds can apparently mistake their profile for a sparrow hawk, according to someone I spoke to from the RSPB. The RSPB also state that
"Long term monitoring by the British Trust for Ornithology (BTO) shows that starling numbers have fallen by 66% in Britain since the mid-1970s. Because of this decline in numbers, the starling is red listed as a bird of high conservation concern."
Whilst the numbers of this glossy mimic have declined, I didn't think they were so scarce now as to prompt the comment I overheard whilst I was taking this photograph. A middle-aged British woman, whom I thought would have remembered the abundant years, said

"Look at that bird on the fence! I don't know what sort it is though?"

I'm afraid I couldn't help but lower my camera, turn to her, smile and say