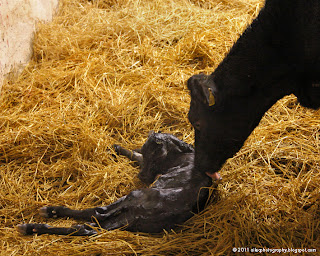 A week ago last night, I was a little sad that my hope of watching the arrival of a new calf was not going to happen before leaving West Cork. Then, at around 9.30pm that night, my friendly farmer rang me to say that there was a heifer about half an hour away from the moment, if I was interested. Interest didn't come into it. I wasn't going to miss this for the world.

Quickly grabbing my camera kit, pulling on my wellies, coat and warm hat, I awarded myself the luxury of jumping in the car to go swiftly on the few hundred yards down the dark lane. When I arrived, all things were quiet and the expectant mum was comfortably contained in the barn. This first-timer, a Jersey/Friesian cross suddenly became conscious that she now had an audience. On the advice of the farmer, I stayed out of view of her as much as possible, my camera set roughly aimed on a tripod and operated with the remote shutter release. (Yes, I have replaced the batteries)

Half an hour moved on to an hour that moved on to two hours, and the initial thought that the delay was due to 'stage fright' changed into concern that there might be a problem. My friendly farmer began to apologise that he was going to have to help out with this birth as the calf was clearly a big one. I needed no apology, what had to be done, had to be done, so with a quick change into a waterproof suit, he entered the barn with some of the kit I remembered from the 'Herriot Saturday evenings'. I will spare you the next few details, but after a lot of pulling and the use of a ratchet gadget on a pole, out popped this tardy calf. Lying steaming and helpless in the straw, it was clear that she had legs that any supermodel would desire. They were long. It would be an hour or so before she would get to her feet so for a while we retired to the warmth of the farmhouse kitchen.

Returning for one last look in the early hours to check everything was ok, we could see that the mother had done her job of washing the calf but it was going to take this new-born a little bit of courage to raise herself up onto those elegant pins. We were keen to see her standing next to the other new arrivals just to compare how much taller she would stand. Alas, it wasn't going to be yet, however, I was happy enough. I had seen this amazing event.

One week on, and I guess this little one is confidently skipping around with all the other new arrivals. I'd love to see her now.
Posted by Celia at 17.2.11