And so it has happened! I was exceedingly fortunate to make a trip out on The Holly Jo, to look for humpbacks on Saturday 7th April. Firstly it wasn't a normal charter for Colin Barnes. This was a research charter by SEAI with the IWDG and with serious scientific study scheduled. (I will be making a second post about the trip which will feature this work) Secondly, it had been unheard of to find humpback whales in these West Cork waters in April. Colin had been out on a fishing charter the previous evening and had come across the humpbacks again, further west from Galley Head where we had seen them last Tuesday. This was enough evidence for the research trip to be organised at short notice for the next day.

I couldn't believe that the weather was so perfect on the Saturday morning. Calm seas with an off-shore breeze and sunshine. Just perfect for me, the poor sailor, although I was taking no chances and popped two of the little 'sailors helpers' regardless. I was not going to have a repeat of a previous trip I had had with Colin where I spent the whole trip in the wheelhouse feeling rather green having been assured by my better half I would be fine without the pills. (That's the last time I take his sea-faring advice!) Apart from which, we saw nothing, and sadly, it also happened on the second family trip out with Colin, which is practically unheard of but probably down to the early time in the season. If anyone can seek out the whales and dolphins, Colin can. He is legendary in these parts. Who knows what went wrong on those two trips but on Saturday I wasn't bothered about the past. I was just looking forward to finally encountering these splendid creatures close-up.

We had scarcely been at sea for 15 minutes from Castlehaven when there was the first call of "Blow!" 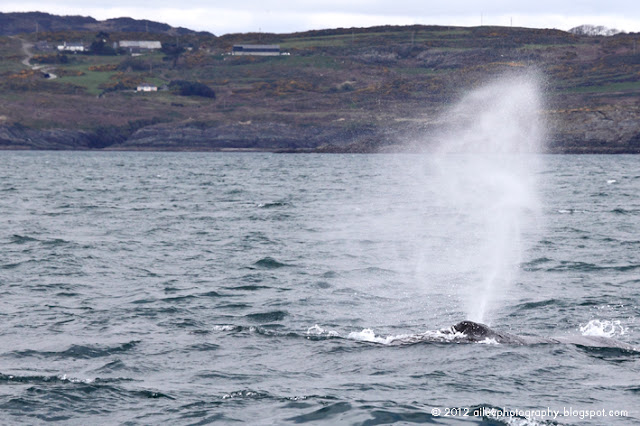 This was to be the start of a most amazing seven hours that I will never forget. The scientific work started immediately and I will detail this in Pt2 of the blog. I am now going to make my apologies to Padraig Whooley from the IWDG as this first blog post is going to be, as he puts it, 'the pretty pictures'. Padraig, the science bits will come, I promise!
I was so engrossed, I had no time to think about my sea-faring well-being. This was wildlife observing at its best. Close to home, on a perfect day and at a time of year it wasn't expected. To top it all, we also observed a new humpback, HBIRL20 which became the latest addition to the West Cork records, swimming alongside HBIRL18 who had already been consistently observed off the South coast of Ireland over the previous few months.

Looking up from the action, I realised we truly were on my home patch, right under Toe Head. We had gradually drifted westward with the tide and the huge shoal of herring and mackerel that the whales were feeding on. I only hoped my better half had been able to pick up my text alerting him to pop out onto the Head to look out at the action. And action was what we were getting. A spectacular display of lobtailing meant that all camera shutters on the Holly Jo were clicking away faster than Denis Noonan playing the bones in De Barras.

We were all aiming for fluke shots of the new addition, an important part of documenting the individual whales, Each whale has unique colouring, shaping and markings and by taking images of the flukes from the top and underside...

and also their dorsal fin from both left and right side...

it is possible to make future sightings accurate.

After easily securing the ID images, we were all able to watch and enjoy this amazing behaviour, their flukes repeatedly pounding the surface of water creating the inevitable spectacular splash.

The day had passed very quickly, and with some successful scientific work having been carried out, plus sightings of at least four basking sharks and possibly a small minke whale, the experience for me couldn't have been far more removed from my first trip out on the Holly Jo. Just amazing!

The following morning we found ourselves in the company of Colin up on the headland, both of us with binoculars poised. Colin had thought he had glimpsed a whale but as we sat and observed for around an hour, it appeared that the humpbacks might have retreated back East along the coast. Wherever they might be, it is only through sensitive and controlled study of their movements that we might learn to understand their life patterns and why they might be in the waters of Southern Ireland during this time of the year.


My grateful thanks to Eugene Mc Keown on behalf of the SEAI. Padraig Whooley from the IWDG and Colin Barnes from Cork Whale Watch

IWDG report from the day