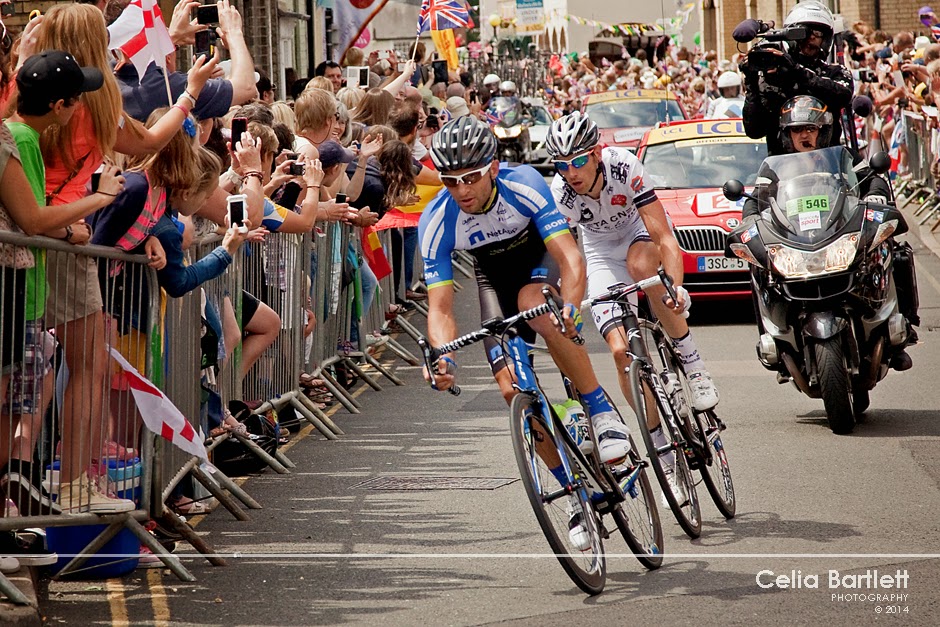 The build-up was long - over months, days and hours and yet the main spectacle was over in less than five minutes.
On the 7th July 2014, the Tour de France came through Saffron Walden.

Thanks to riders Jan Barta (Cz) and Jean-Marc Bideau (Fr) who had forged out ahead (and had held that lead until the last two miles) we had a slightly extended show over and beyond the three minutes which had been anticipated for this Stage 3 event.
But what an event! 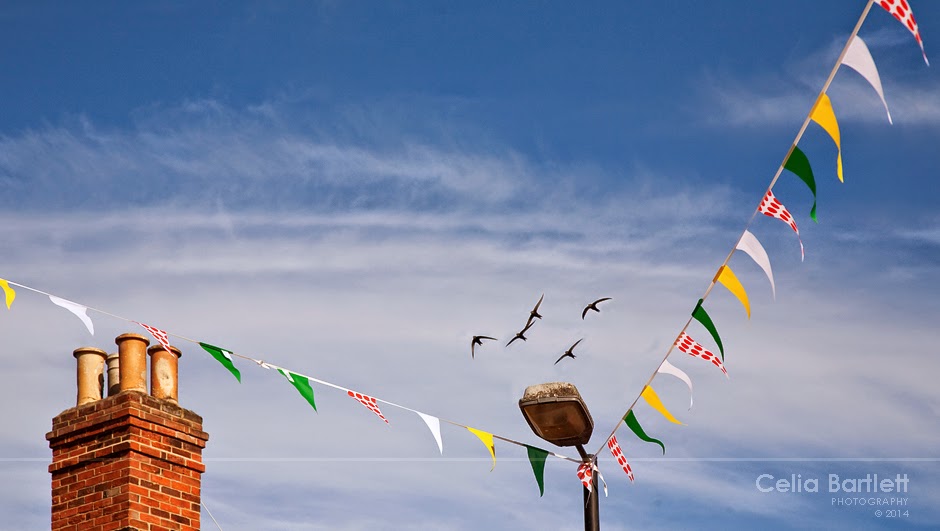 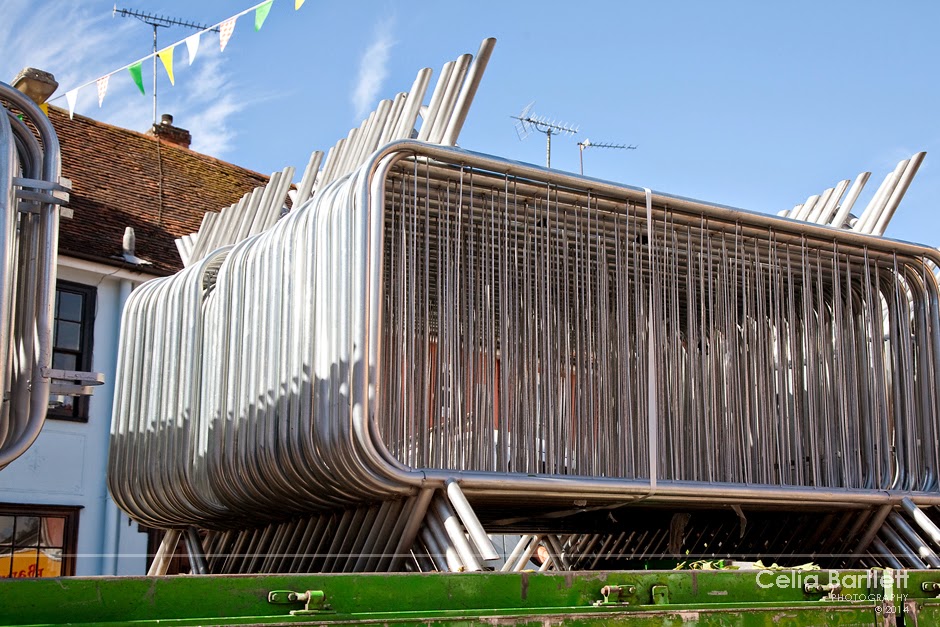 Preparations had begun early on this glorious summer morning with the keenest amongst us out to bag our spot ahead of the barrier contractors, who completely threw our group of togs, by placing more barriers in front of our carefully chosen spot, thus instigating a quick change of plan. All was not lost though. 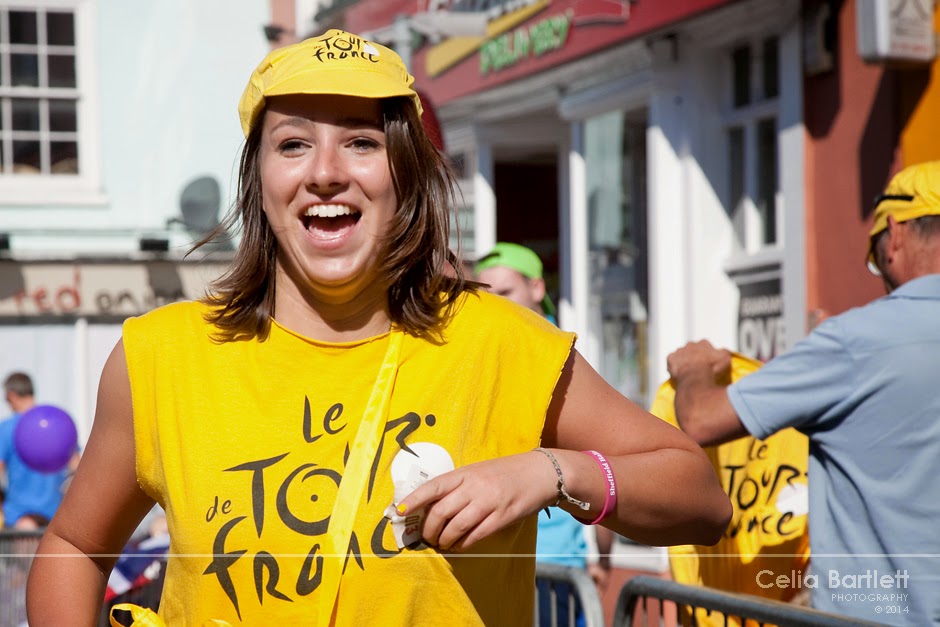 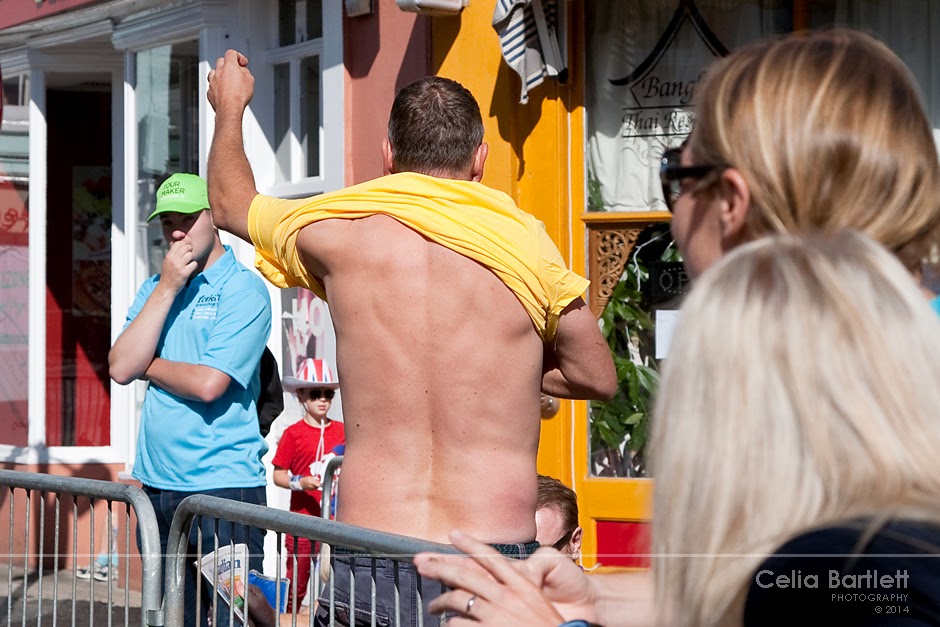 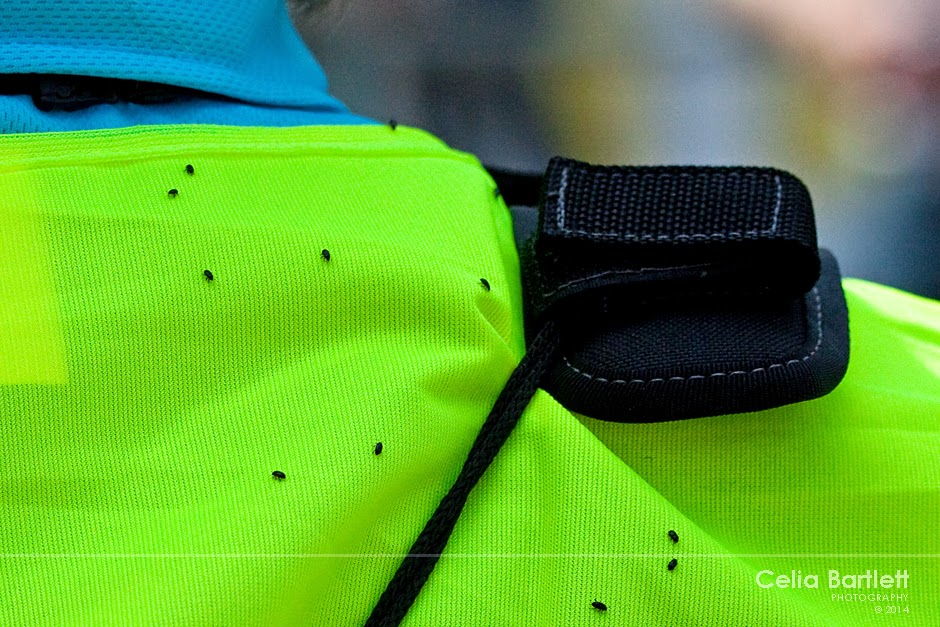 Also out early were the French Tour de France merchandise sellers, who literally rocked up, music blaring, in their precarious back-of-the-van retail outlet offering packs of all-yellow Tour products. Several early spectators were keen to show their support of this once-in-a-towns-lifetime event by donning the bright t-shirts. Also displaying their delight were the pollen beetles, in fact they were too delighted, with the myriad of yellow garments becoming a magnet for their attention. No sooner had these t-shirts been put on than they were swiftly removed in an attempt to be rid of the unwanted hitchhikers. 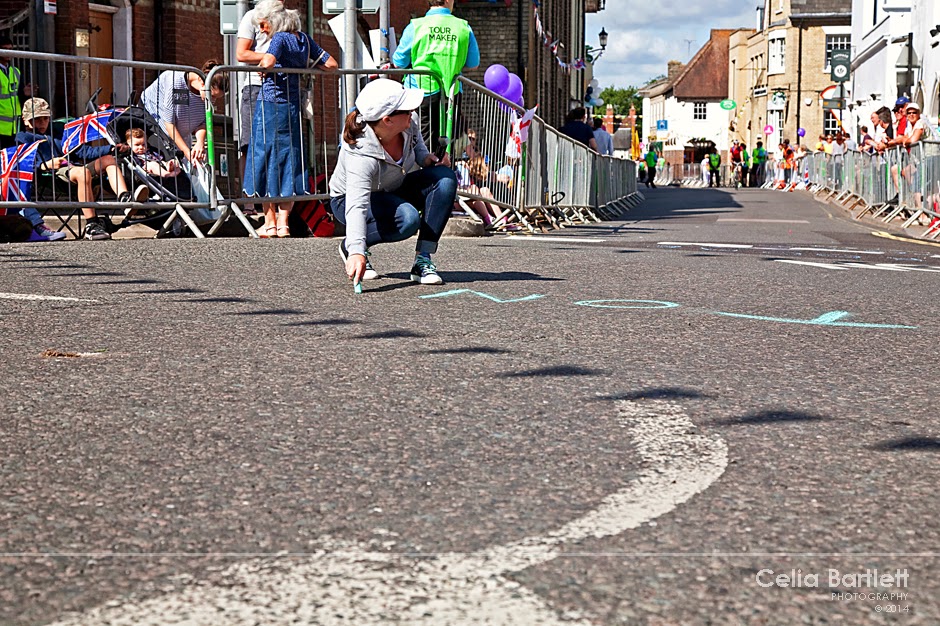 Not all pre-race preparations were so fraught with hazard, at least not today. The empty road provided the perfect canvas for chalky messages.

Then came the waiting...

The crowds began to fill out.

There was more waiting and then... 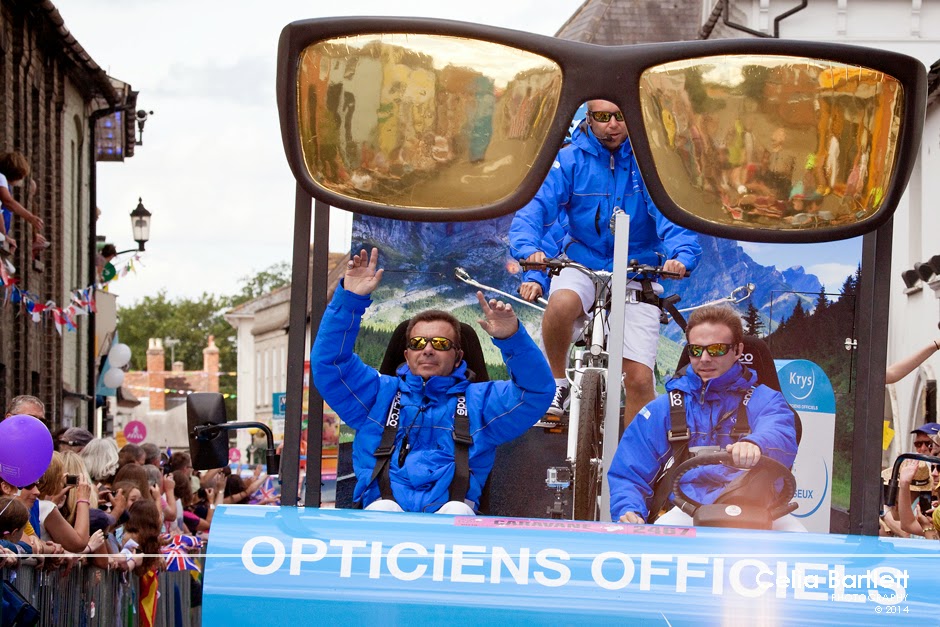 ...came the bizarre spectacle of the 'Tour Caravan' - ten minutes of assorted whacky vehicles which in customary French flamboyant style; bemused, boomed and bounced their way over the mini roundabout in front of us. 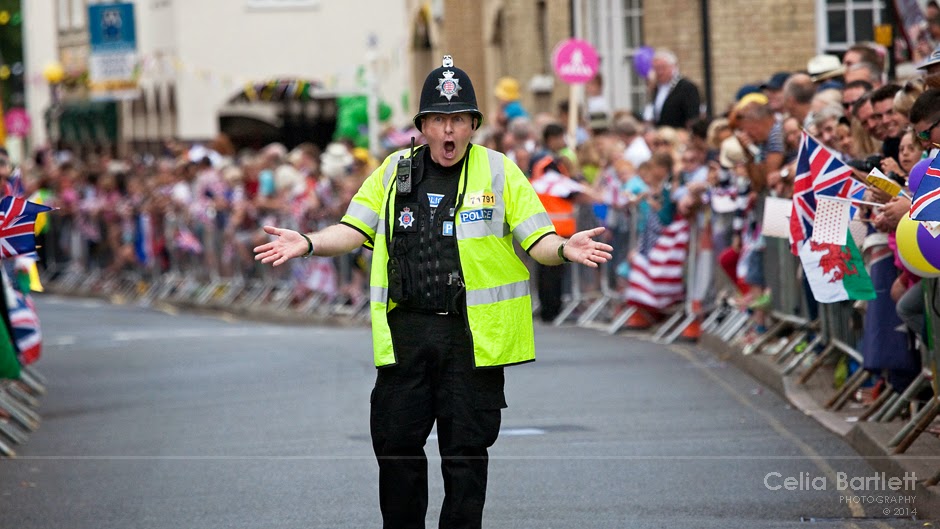 However, we Brits are known for our own unique sense of humour and entertainment and surely, the award has to go to the police officer 71791, who performed for the crowds along Hill Street, running, soaring and weaving along the empty impromptu stage before instigating an Oggi-oggi-oggi shout-out challenge with the opposing crowds.
Best warm-up act I've seen in a long while! 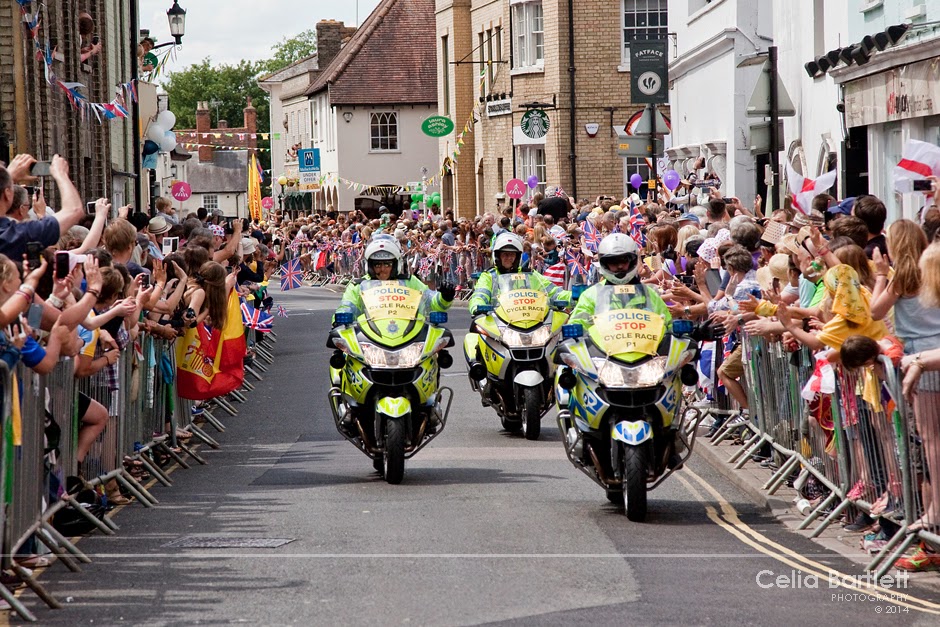 Anticipation was building, and the arrival of three police motorcycle outriders indicated that cyclists were imminent. News was circulating that two riders had gone out ahead of the peloton and very soon, the arms of the crowds began to rise - flags, hats, cameras, iPads (iPads? - and pink ones at that!!) were being pointed in the direction of the first two riders. 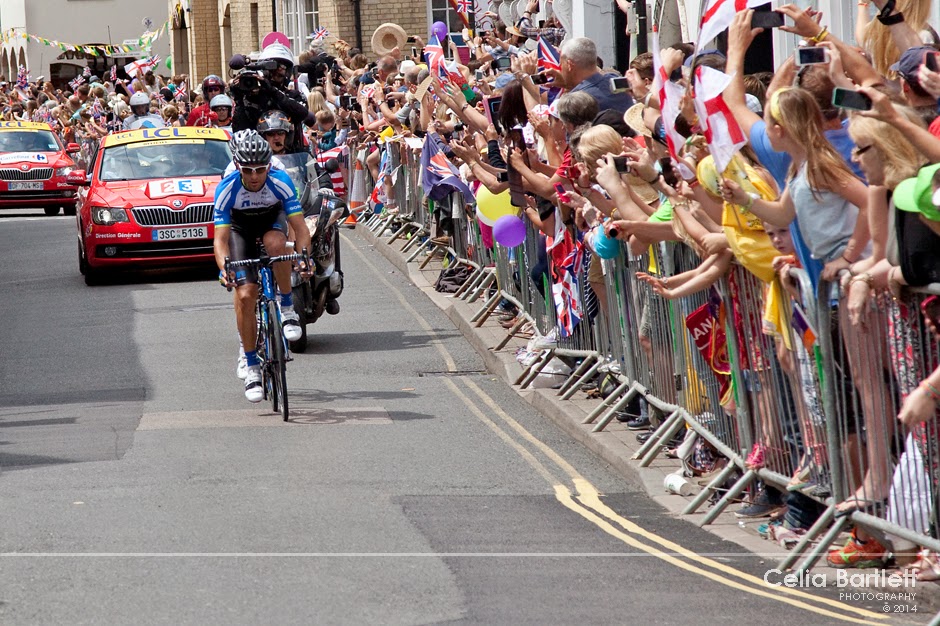 Appearing as if in tandem, I knew there would be a short window of opportunity to document this landmark event, and before I knew it, the two riders had passed in front of me, taking the right-hand line past the hump of the mini-roundabout. 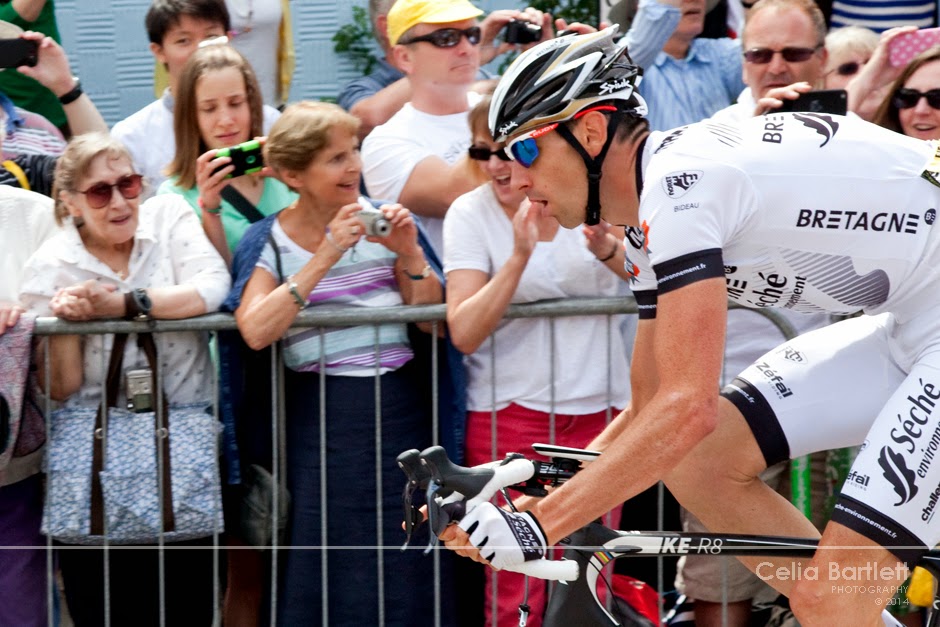 Having now had 'they will be swift' suspicions confirmed, the joyful crowd had just under two minutes before the peloton would whizz past. 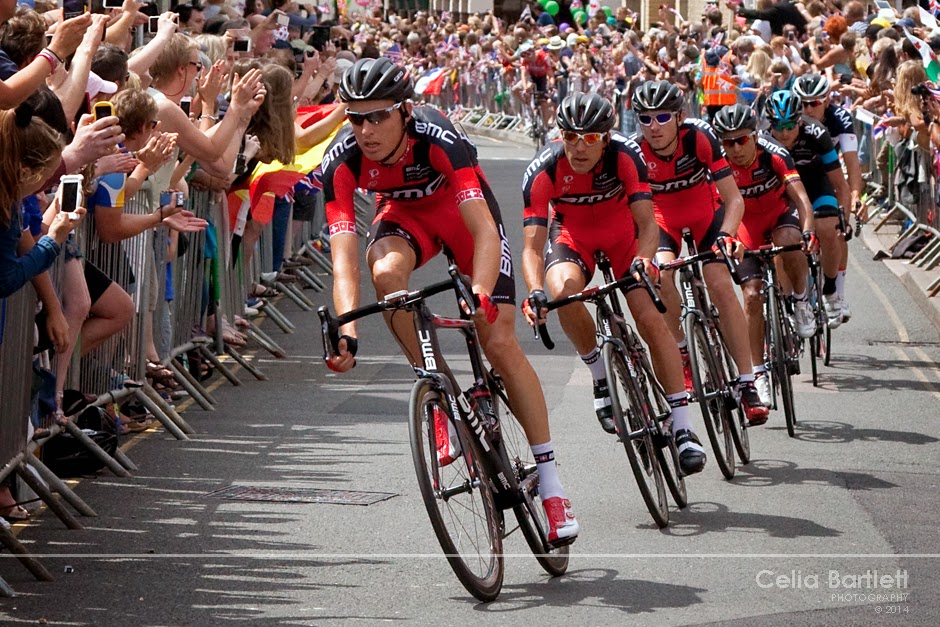 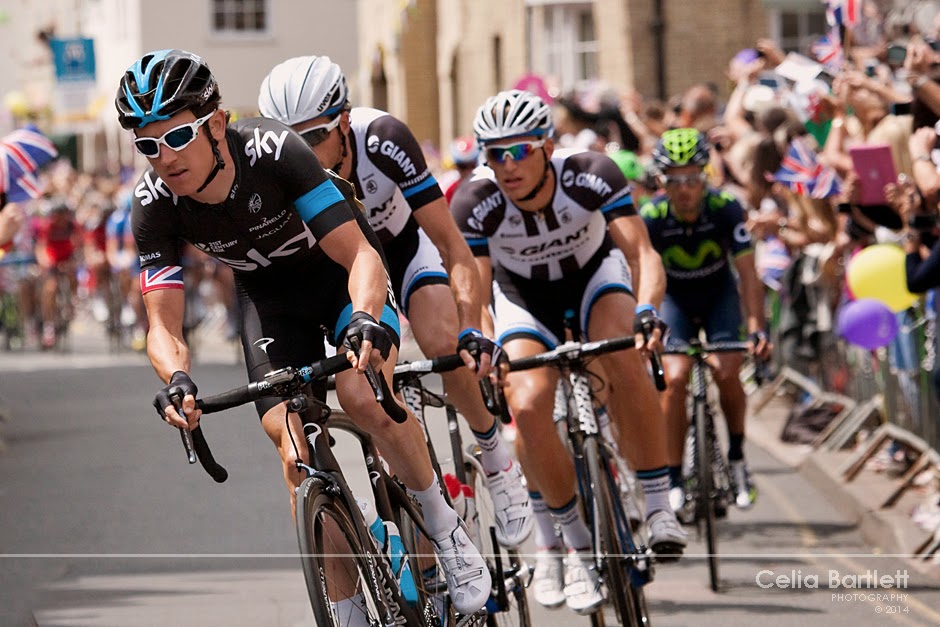 And whizz they did, even with many teams being beneficially bunched, it was possible to pick out the odd rider, here being UK rider Geraint Williams of Team Sky Sport. However, was one of the riders wearing a yellow jersey? If there was, I'm afraid I didn't spot it! 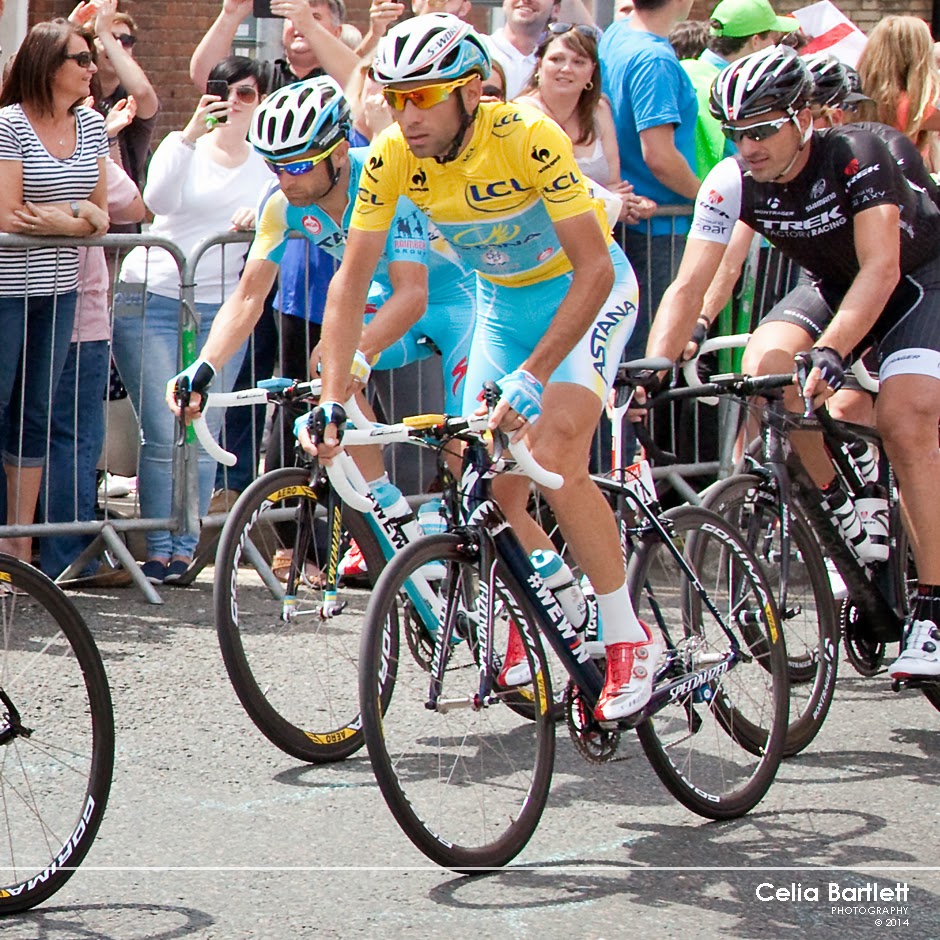 Post script - Found him!
Knew he would be in there somewhere.
Vincenzo Nibali 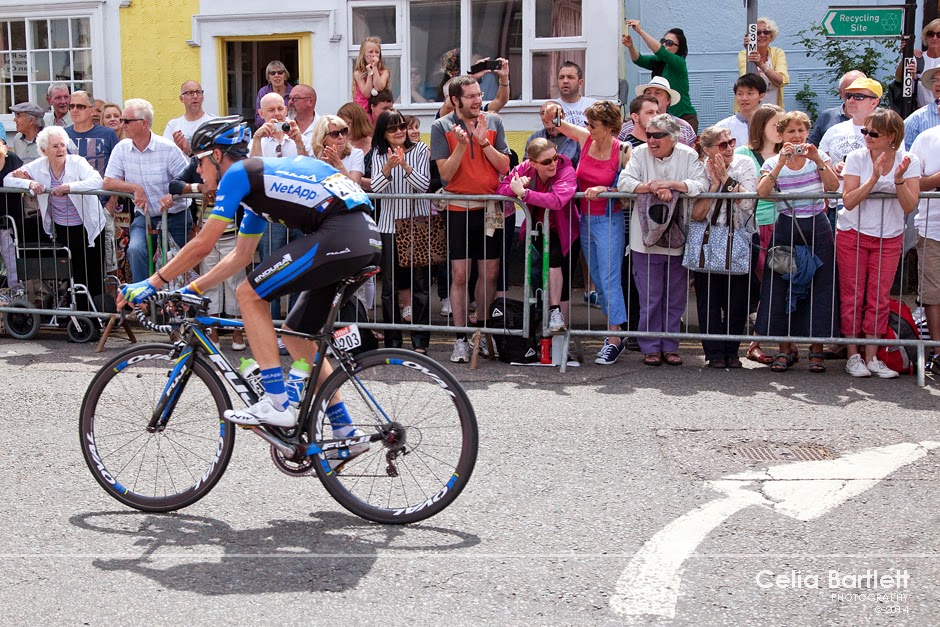 With the tail-end-charlie passing my spot, it was only a matter of minutes before all the team support vehicles, loaded with spare bike frames and wheels had also gone past on their once-only route. It dawned on the Tour Makers that that was it and the happy crowds surged to the crossing points, eager to get back to where-ever. The hours of build-up and waiting was dissipated in just a matter of minutes - almost as fast as the passing of Stage 3 of the Tour de France. 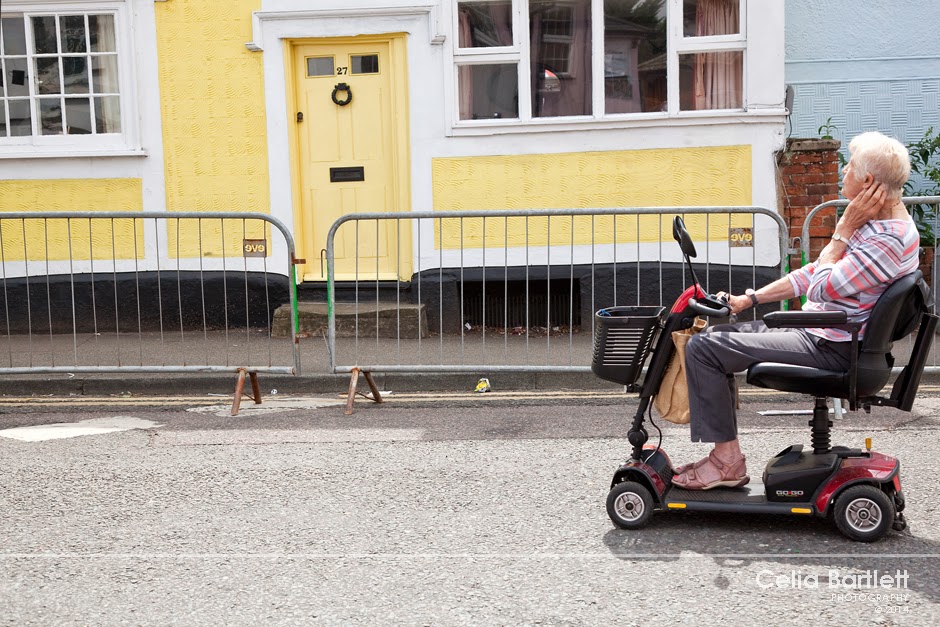 With the pavements now emptied and the roads still closed, one last intrepid wheeled spectator took the opportunity to bask in the imagined cheers that not long before had filled the spot for real. 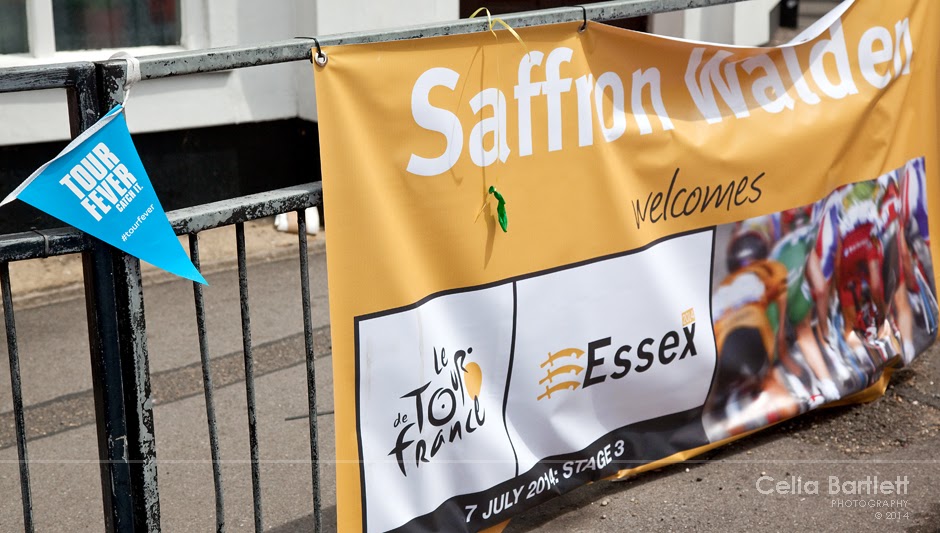 Tour fever was over...but not in our memories.

I am delighted to announce, that due to popular request, I have produced a souvenir book of these and more images, which is available from my website and Saffron Walden Tourist Information Centre.