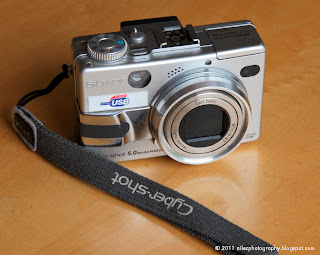 On a day when the car temperature sensor hit 30 degrees, I chose to hit the air conditioned shops. Making straight for a favourite department store, I was happily on a mission to buy, rather than just looking longingly at, a successor to the p&s role.

I am pleased to announce that 5D mkII now has a baby sibling - a G12. Just like any anticipated new arrival in the family, there is already a familiarity with the way it might behave, but now begins the real getting-to-know. There will be highs and lows during this settling in period, I know but in general I am excited about the increased abilities of this useful, photographer's companion.

So what of the old p&s? Well, it will be put into semi-retirement during this change-over period and then maybe full retirement. It will be hard to do as it has been an excellent camera along the way. It was my entry point from an SLR into digital around nine years ago, choosing it specifically because I was told it would 'Keep SLR users happy' And it did just that. It has travelled many thousands of miles including trips to Europe, America and Africa (twice). It has been around the clock at least twice, if not three times. I admit, the deteriorating battery life has been a bit of an issue by switching off at critical moments, but all in all, it doesn't owe me anything. Even when it was demoted following the arrival of my first 5D it still proved useful for the situations where a full-blown camera would be a problem. G12 will be thrust into such a situation this coming weekend, so it will be interesting to see just how the new arrival performs.

I will leave you with one last thing. As I was leaving the customer service till, the assistant instructed me to keep the receipt.
"The camera is guaranteed for one year and the (store brand) camera bag is guaranteed for five years"

They do say it is hard to put a value on some things but old Sony, you were invaluable.
Posted by Celia at 3.8.11